Sally Conway capped off a fantastic string of performances to win a bronze for Great Britain on Day 5 of the judo at the 2016 Rio Olympic Games.

The 29 year old Scot stepped onto the mat for her first contest against Tunisia’s Houda Miled with a determined but calm facial expression. Conway lost their only previous meeting at the Dusseldorf Grand Prix last year, but Conway was not to be denied. The Bristol born judoka was immediately on the attack forcing her opponent to the ground. Miled was unable to break free and was forced to tap out after only 57 seconds.

That victory set up a difficult last 16 contest against World Number 3 and two time World Champion Gevrise Emane of France. French judoka was one of the favourites for the gold medal going into the contest as both judoka showed their speed and mobility in the early engages. But then Conway was penalised for passivity giving Emane the confidence to launch a range of attacks.

Conway escaped Emane’s two throws and managed to wonderfully reverse her French opponent’s attempted hold to successfully pin Emane for an ippon. Conway was wearing her trademark smile as she stepped off the mat as the magnitude of her win over such a formidable opponent hit home.

With World Number 1 Kim Polling and World bronze medallist Seongyeon Kim already eliminated, Conway’s showdown with Israel’s Linda Bolder represented a fantastic opportunity for the Edinburgh judoka to get into the medal matches.

Bolder had clearly been watching Conway’s early contests and started cautiously. Conway managed to get the former Dutch judoka to ground twice only for the referee to call mate on both occasions. Bolder then conceded a shido forcing her to go on the attack. That played into Conway’s hands as she converted a waza-ari into an ippon to send her in to the semi finals. The Carioca Arena 2 erupted with noise as Conway gave a thumbs up as she exited the arena to prepare for an Olympic Semi-Final match against Yuri Alvear (COL).

The Colombian had been in strong form earlier in the day defeating Maria Perez (PUR) and Maria Bernabeu (ESP) on route to the semis. With the nation watching live on BBC One, Conway rose to the occasion attacking the three time World Champion from the outset. The Briton was dominating the contest but just couldn’t release the Colombian’s arm to execute an armbar. Alvear showed her strength and continued to resist Conway’s efforts in ne-waza.

The contest went into Golden Score where Alvear managed to score a waza-ari to progress to the gold medal match but Conway still had the chance of a bronze.

Standing between Sally Conway and an Olympic bronze medal was Bernadette Graf of Austria. Graf went into the contest as the World Number 7, but Conway had already beaten her twice before prior to the Games. 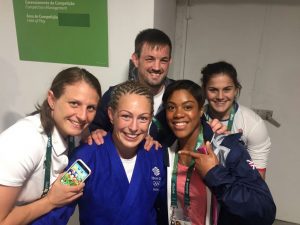 Graf started well forcing Conway to concede a shido, but this was Conway’s night. The British judoka struck back with a yuko and although conceded a second shido for blocking out, held on during the final minute to secure a deserved bronze medal.

“It hasn’t sunk in,” she told BBC Sport. “I knew if I was going to come away with a medal I would have to put in my best performances.

“I’m not from Brazil but the crowd have been awesome. I just want to thank everyone.”

The drama continues tomorrow with Great Britain’s Natalie Powell (-78kgs) and Ben Fletcher (-100kg) both in action at the Carioca Arena 2 in Rio.

You can follow the action on our Live Blog or watch it live on the BBC via the Red Button.