Mahama Cho was the toast of Turkey for GB Taekwondo tonight (Sunday) after confirming a spot in the men’s heavyweight competition at this summer’s Rio Olympic Games.

Needing to reach the +80kg weight division final to guarantee the place, the ‘Stockwell Slayer’ went one better by winning the European qualification tournament.

Cho must wait to discover if he will be Team GB’s +80kg nomination but there will now be four medal opportunities for the Manchester trained squad in South America.

Cho won three fights in Istanbul, including an 11-3 semi-final triumph over Italy’s reigning Olympic gold medallist, Carlo Molfetta.  And that was good enough to book another ticket for Rio.

However, the euphoric 26-year-old London raised star won gold of his own with a 4-2 win against Belarus’s Arman Marshall-Silla, the reigning European champion.

“It feels absolutely fantastic-now the real work starts,” said Happy Cho. “But I’ve received so many messages and I’m overwhelmed with how much support I have had. 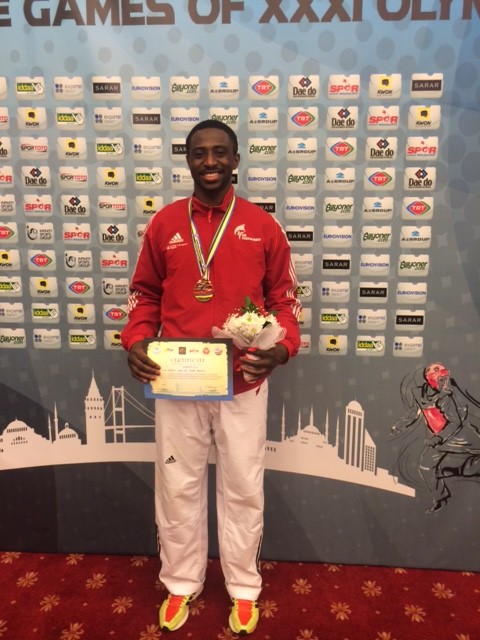 “It’s a blessing to have so many people behind me and that will make all of the difference when it comes to the Olympic Games in Rio.”

Despite the size of prize resting on his semi-final with Molfetta, Cho insisted his emotions were in check.

“I was calm and composed and had a good game plan,” he said. “Each fight was important, each round was important but I controlled the fights from start to finish.

“Moving forward, I’ll be working on that and improving as much as I can. Hopefully, my performance will be much stronger than it was today.

“This was the third time I’ve met Molfetta in the ring and I’ve got one win over him at the moment. He’s a good fighter and a great champion. He’s got a lot of experience but only one of us could win.

“And the credit is due to all of the staff members at GB Taekwondo and my team-mates who have supported me through this time.

“It just goes to show that if you put your mind and heart towards something anything is possible. I’m really happy and I’m grateful to God for the blessings that he has given me.

“I’ve been on a bit of a rollercoaster since last year and the support and belief from the coaches at GB Taekwondo has been fantastic.

“But the season’s only just begun. We’ve got the Dutch and German Opens which are just around the corner so I need to get back in the gym and re-focus.”

“It was a great performance by Cho,” said GB Taekwondo Performance Director, Gary Hall. “There was a lot of pressure on him but we were always confident he would justify the selectors’ faith in him.”