Great Britain signed off from the European Aquatics Championships in London to the sound of their national anthem as the team crowned an impressive week in the pool by winning both the women’s and men’s medley relays.

The final day’s action saw a Britain add five medals to finish with 22 in total, the highest number of any nation despite being in heavy training as they continue to prepare for the Rio Olympics.

The penultimate swim of the night saw the British quartet of Kathleen Dawson, Chloe Tutton, Siobhan-Marie O’Connor and Francesca Halsall win gold in the 4x100m Medley Relay in a time of 3:58.57.

After securing the European title O’Connor said: “It was absolutely amazing to win that on the final night. The crowds have been amazing all week, having that home support has really made a difference to our performances, so thanks to everyone.”

Celebrating her fifth medal of the Europeans, Fran Halsall said: “The team is on such a high, there’s lots of confidence within the team. It’s a nice way to finish off the week for the team. The girls built such a great lead and I just had to bring it home.” 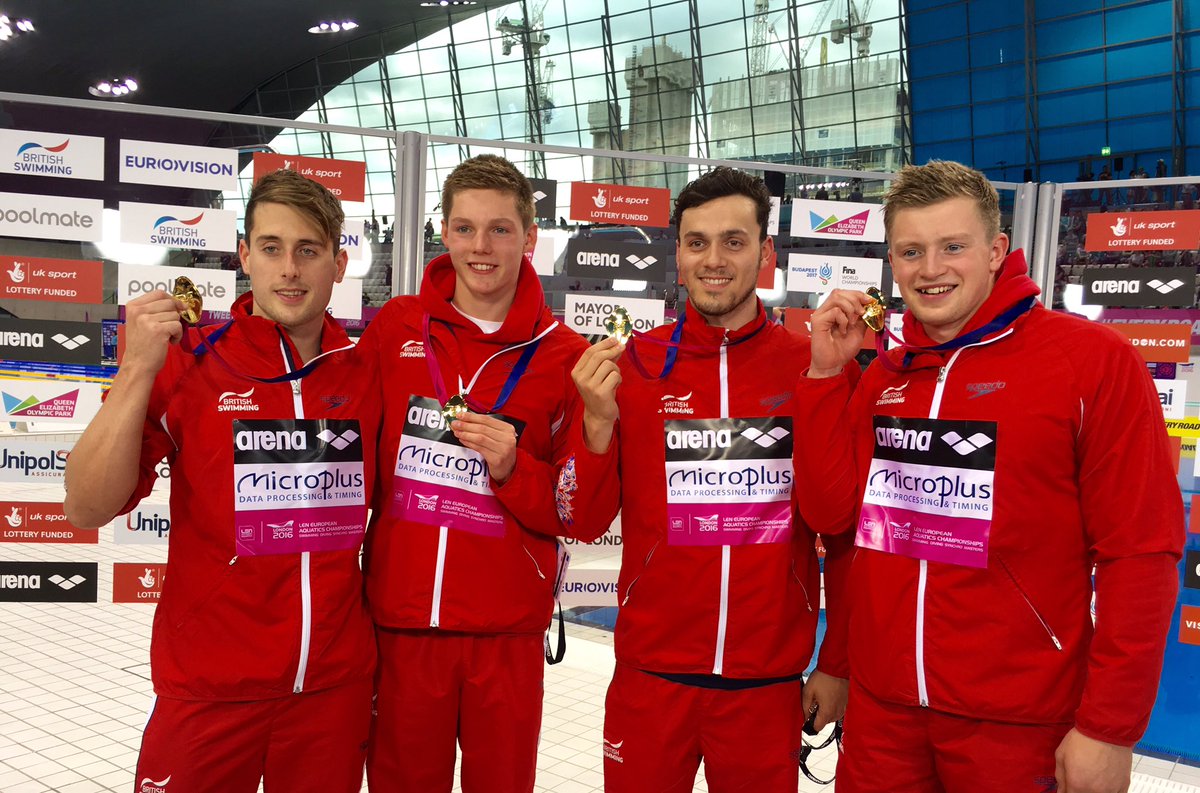 The men’s team, made up of Chris Walker-Hebborn, Adam Peaty, James Guy and Duncan Scott, dominated to take the win and capture GBR’s second gold of the night in a time of 3:32.15

Walker-Hebborn said, “To swim like that with these guys was incredible. We’re not shaven down or tapered coming into this meet so that just demonstrates to the rest of Europe and the World the position Great Britain are in.

Peaty added, “It’s a great arena to demonstrate our form. The chemistry is building within this team and that’s only going to grow stronger in the build up to Rio.”

Great Britain also saw two silver medals added to the tally on the final night in London from Fran Halsall and Jazmin Carlin.

Halsall claimed her third individual medal of the week, this time in the Women’s 50m Freestyle, when she posted a time of 24.44.

Halsall said, “It’s been a really busy week for me, lots of competitive racing and lots of success. Every race is a perfect opportunity to get in the race and practice starts and the processes.

“It’s been my best series of swims for a while so I really can’t complain and I’m looking forward to the rest of the season.

Carlin won a hard fought battle to secure second place in the Women’s 400m Freestyle and finished the swim in a time of 4:04.85.

“I was a bit nervous after this morning but I just stuck to my race plan and it paid off. A silver is a good result for me and great motivation for me going forward.

“There’s things I want to work on and fine tune with my coach as we really start to work towards Rio now, and this gives me a good platform on which to build.”

Great Britain’s fifth medal of the night was captured by Ben Proud, he won himself a bronze in the Men’s 50m Freestyle.

“This week has been busy for me and I’ve learnt about how to manage my racing as I progress through the rounds,” said Proud.

“I’m still in the middle of a heavy training block so to get the results I’ve had has meant it’s been a great European Championships in London for me.

“To come third was a good result considering my training but continuing on through the rest of the season hopefully I can better that result.”

For full results from the LEN Aquatics Championships 2016:http://london2016.microplustiming.com/Elite/indexLondonElite2016_web.php?sport=Swimming The British Swimming contingent competing at the LEN European Short Course Championships have added silver and bronze to their medal tally that now sits at seven.

Siobhan-Marie O’Connor, who set a new British standard on her way to the 100m Individual Medley final, looked strong through the race as she aimed to stick close to double world champion Katinka Hosszu (HUN), who set a new world record. The National Centre, Bath swimmer touched just behind Hosszu for silver and ahead of Marrit Steenbergen (NED).

Triple world champion Adam Peaty, who has been nominated for BBC Sports Personality of the Year for the second time running, progressed fastest through to tomorrow’s final of the 100m Breaststroke.