British Champion Amy Tinkler says the Olympics feels “very real” after a recent training camp in Rio alongside her GB teammates during which they took the chance to visit the Olympic village and facilities as build up intensifies for the summers Games.

16 year old Amy was joined by gymnasts Ellie Downie, Gabby Jupp, Becky Downie , Kelly Simm, Claudia Fragapane, Ruby Harroldand Rebecca Tunney on the week-long trip which saw the girls train alongside the Brazilian national team. The camp gained lots of interest from the media in Brazil with the British Consulate General also paying a visit to support our gymnasts.

Describing her first trip to Rio Amy said: “It was amazing; the whole place was so beautiful. We got some time out of training to explore the city, so went to see Christ the Redeemer and spent some time at the beach. We also got to see the Olympic village which was very special and absolutely brought home how real it is that the Olympics are happening this year – it was very motivational to be there and get a feel for what it will be like in the summer. At that point I think it really sunk in to everyone how close the Games are”

“We also trained hard of course, which included some sessions alongside the Brazilian team which was great. All the GB girls are looking very strong and very driven and I think the trip definitely inspired us all. Where we trained was the warm up hall for Rio 2016 on the Olympic Park so you got a great feel for how it will be in August.” 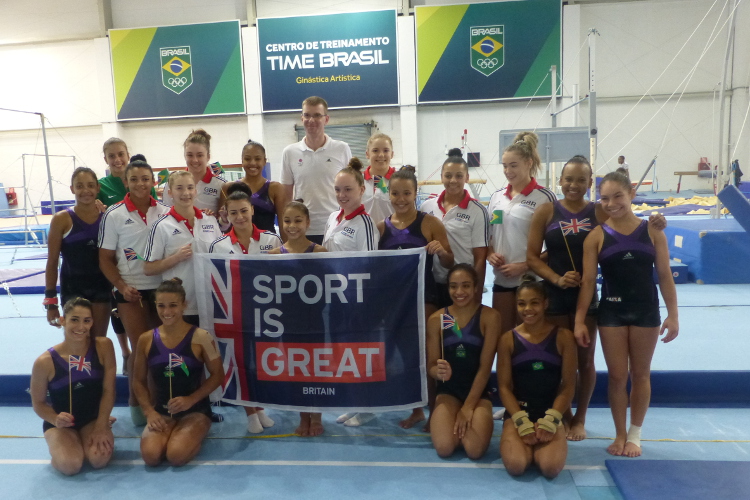 Having been part of the GB team that took historic World Championship bronze in Glasgow last year, Amy and her teammates are ready to push on in 2016 as the gymnastics competition season gets back underway and the girls look to secure individual places in the team for Rio 2016.

“The reaction to our performances at the World Championship was unreal.” says Amy” I came home to find banners all over the house and back in the gym everyone went crazy which was amazing, the support we all felt from everyone was very special. Winning the team medal definitely gives us all a lot of confidence, we’re all training hard and all making improvements because we all know that it’s a reality now – we are capable of winning medals. Personally I’ve been working a few new skills but I’m not sure when they will be ready to compete. My first competition is the American Cup which I’m really excited about as it’s such a huge and prestigious competition. It will be a chance for me to try different options and make a to start my season.”

Further ahead lies the British Championships and a chance for Amy to defend her all-around title. With Echo Arena tickets nearly sold out and the BBC cameras covering the event, Amy is excited to be back in the limelight competing in front of a home crowd saying “My experiences over the last year have definitely helped me in big competitions but I’ve always been brought up to enjoy competing so I never get that nervous, I love the big crowds! Being British champion has been crazy, out in Brazil I did media interviews and kept being reminded that I was British champion, which always sounds great to me.

I’m really looking forward to this year’s British Championships, it’s always one of the most special events of the year and even more so in an Olympic year. It would of course be nice to defend my title successfully but the big focus with it being an Olympic trial is to compete cleanly, everyone is at a really high level at the moment so to win again is a big challenge. For me being consistent is key. I think it will be over the whole year, we know that as we get closer to Rio and we aim to get places on the team the pressure will increase so I’m hoping my consistency and ability to control my nerves will help a lot.”

The 2016 British Championships takes place at Echo Arena, Liverpool from 8-10th April, tickets for the event are still available here.