There have also been stage wins for Steve Cummings and Mark Cavendish, whose four victories took him to second in the all-time list of stage winners. Team Sky’s Ian Stannard, Geraint Thomas and Luke Rowe offered superb support for Froome while emerging sprint talent Dan McLay impressed on his Tour debut.
Source:  https://www.britishcycling.org.uk/about/article/20160724-about-bc-news-Tour-de-France-2016–Howden-hails-magnificent-British-cyclists-0#k41CW0GScUthgIJ8.99 The men’s and women’s time trials take place on Thursday 23 June, ahead of the road races on Sunday 26 June.

Mark Cavendish (Dimension Data) heads a strong line-up in the men’s road race. The 2013 British champion and 2011 world champion will go up against Team Sky contenders Ian Stannard, Luke Rowe and Ben Swift as well as former under-23 champion Scott Thwaites of Bora–Argon 18. Peter Kennaugh will be unable to defend his title after sustaining a broken collarbone at the Tour of California in May. In the men’s time trial Alex Dowsett (Movistar) will attempt to win a record fifth British time trial title whilst Team Wiggins’ Scott Davies will attempt to make it three successive national titles in the under-23 men’s competition.

In the women’s time trial, Emma Pooley continues her comeback from retirement in the run up to the Rio Olympic Games. The Beijing time trial silver medallist will have to overcome competition from 2015 champion Hayley Simmonds (Unitedhealthcare Professional Cycling Team), 2015 silver medallist Molly Weaver (Liv-Plantur) and multiple Paralympic champion and 2015 bronze medallist Dame Sarah Storey if she is to claim her fourth national title. UNDER-23 MEN’S TIME TRIAL
Source and more info at https://www.britishcycling.org.uk/road/article/20160606-road-British-Cycling-announces-world-class-field-for-National-Road-Championships-0#kA4DJWoC5iW3aJxg.99 In front of a raucous sell-out crowd, Cavendish and Wiggins amassed an impressive points tally in the early part of the race but early lap gains from France, Switzerland and Colombia meant that the Great Britain duo lay tantalisingly outside of medal contention.

But after 168 laps of the 200-lap event Wiggins launched a searing attack with Spain and the 2008 champions dug deep for an agonising lap gain.

France, Switzerland and Colombia lifted the pace in concert to attempt to break British hearts but Cavendish and Wiggins wrung everything out for 16 long laps, when Cavendish made contact with just one sprint left.

The drama wasn’t over thought, Cavendish falling hard on turn one. But the Manxman quickly re-joined and any final doubts were gone. The British pair had rolled back the clock eight years, winning gold to the delight of the capacity crowd.

Laura Trott produced a superb display of consistency to outwit rival Sarah Hammer and reclaim the omnium world title that had eluded her since 2012.

Trott was never out of the top three throughout the six-event-discipline and consolidated her victory with a mature points race performance, reclaiming the title she last won four years ago in Melbourne, just months before claiming the Olympic title.

“It’s taken me four years to get this jersey back in the omnium,” said a delighted Trott.

“I cannot thank (coach) Paul Manning enough.The work he’s put into this omnium for me this year has just been incredible. Last year I was so disappointed to get silver again and to have such a bad scratch race – it just spurred us on and made us think about it. It’s down to him that I’m back in the rainbow jersey.”

“It’s about executing your plan,” Trott continued. “And if one race goes wrong in the omnium, that’s it – you’re a lot of points down.

“Laurie Berthon and Sarah Hammer were fighting over one point the whole time and I didn’t want to be in that position.

“I wanted to have a lead and with 12 points I thought it might be a bit touch-and-go. But once I took that first set of five points I was settled then – I was into that race and I loved every minute of it.” 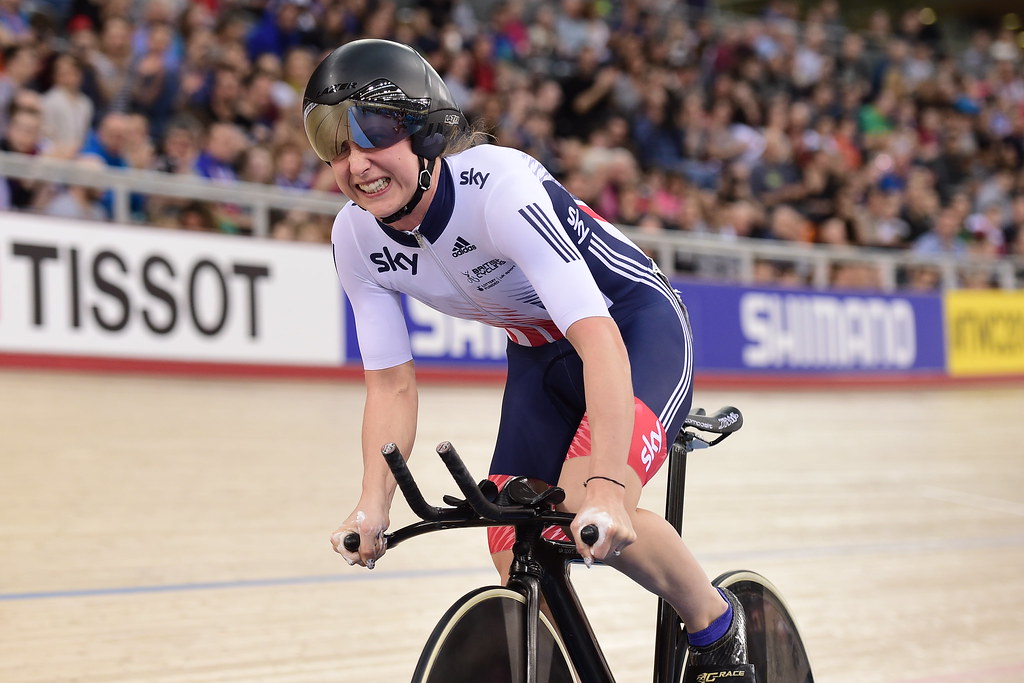 Trott lay in second place behind Hammer after Saturday’s events; third in the scratch followed by a brace of second places in the pursuit and elimination.

The 2012 world and Olympic champion took third place in the 500-metre time trial and flying lap as Hammer’s consistency faltered, leaving her with a 12 point advantage over Laurie Berthon of France ahead of the points race.

Trott came out of her corner fighting, taking maximum points in the first sprint and extending her lead over Berthon and Hammer. The Briton scored again in the third sprint, breaking free of her French and American rivals who marked her closely.

The cat and mouse continued, the halfway sprint seeing Trott, Hammer and Berthon taking a 1-2-3. But the Essex-born rider was slowly edging away and despite Hammer winning the following sprint, the American was 20 points behind her rival with four sprints remaining.

Trott nudged her tally over the 200 point mark with two sprints to go and began to close in on gold. The final two sprints saw Hammer and Berthon gain points but their target was now silver or bronze, knowing that it was too late to prevent Trott taking a second gold medal at the championships and a seventh world title. Jason Kenny looked to be heading towards the medals in the keirin final before dropping back on the last lap to finish sixth.

Kenny survived a close call in the first round to finish second behind Levy, avoiding a crash that took out Matthijs Buchli of the Netherlands and Rafal Sarnecki of Poland.

The 2013 keirin champion measured his effort wisely in the second round, taking third place behind Joachim Eilers of Germany and Edward Dawkins on New Zealand to make the final.

Come the final and the Briton looked poised to compete for a second medal after winning sprint gold on Saturday but sat up suddenly on the final bend, leaving Eilers, Dawkins and Awang of Malaysia fight it out for the win, the German adding to his kilo world title earlier in the competition.

“I didn’t feel I had the legs to take it on from the front so I was gambling and gambling, trying to get a wheel,” the Bolton rider told BBC Sport.

“I ran out of legs really quickly, which I expected. I was pleased how I got to the final, I got there efficiently, but couldn’t quite get down to the black line.

“The main thing for me and the sprint lads is that we’re fast enough to be competitive with five months to go to the one we want to win.”

Great Britain topped the medal table with nine medals; five gold, one silver and three bronze, ahead of Germany on eight and Australia on five. It is almost seven years since Mark Cavendish last pulled on the Great Britain Cycling Team kit on the track on the world stage, but this weekend will see the Manxman make his long-awaited return at the UCI Track Cycling World Cup in Hong Kong.

The 30-year-old made the full-time transition to road racing, winning rainbow stripes at the world championship and becoming the most successful sprinter in Tour de France history. But Cavendish says there’s still something missing.

“I’d like an Olympic medal. I’ve only got a couple of Olympics left.”

Cavendish missed out in Beijing in 2008, finishing ninth in the Madison alongside Sir Bradley Wiggins. Such was his reputation on the road by London 2012, that other nations marked him as the ‘one to win’ and prevented him from claiming gold at his home Games.

With the first South American Olympics on the horizon in Rio this summer, Cavendish will tackle the omnium in Hong Kong this weekend with only one target on his mind.

“I haven’t qualified for the Olympics yet, so I need to get points to qualify.

“As an endurance rider, I like the new format of the omnium, with the points race at the end. It plays into my strengths as a rider.

“I’ve been doing a lot of track training, a lot of specific stuff for the 250 and the timed events that can detriment that final points race, but hopefully I can get Olympic qualifying points and I’ll be in the contention for the Olympic Games and then we’ll see what we do from there.”

2016 is set to be another busy year for the Manx Missile, with his lofty track ambitions alongside his aims on the road. As well as targeting an Olympic medal and a rainbow jersey at the track world championships in London, Cavendish also wants to become world champion on the road once more with a win in Qatar this October, as well as to hold the Tour de France yellow jersey for the first time this summer.

It’s a big wish list, but Cavendish is confident he can manage the workload.

“First and foremost, I’m a professional road rider. That’s how it is. My job is on the road, but I’d like an Olympic medal.

“I think we’ve got a great structure (in the Great Britain Cycling Team). Shane Sutton and Heiko Salzwedel  have known me since I was pretty much a kid and they’ve both had massive influences on my career, so to be able to work with them and the guys around is pretty nice.

“I know that Dimension Data (Cavendish’s new road team) and the guys there have got trust in me that I can work the two and I’m incredibly fortunate that they’ve given me the leniency to work for them both.”

Who would bet against Cavendish achieving his 2016 dreams? The road to glory begins in Hong Kong.