England’s men made it double Commonwealth bronze after putting in an excellent display to defeat India 2-1.

Sam Ward’s goalscoring exploits were again decisive as he scored both of the goals for Bobby Crutchley’s side, but it was very much a team performance to secure consecutive bronze Commonwealth medals for England’s men.

The Beeston forward struck twice from penalty corners, his first coming in the opening quarter, only for Varun Kumar to equalise before half-time from his own corner.

But despite some Indian pressure it was Ward who scored a 42nd minute with a very clever reaction finish after his initial effort was blocked from a corner to win the game and a third Commonwealth medal in the men’s team’s history, following bronzes in both 1998 and 2014.

Speaking after the game, Ward admitted feeling overcome with elation at winning the bronze while also thanking his team-mates for their ability to provide him with plenty of goalscoring opportunities. 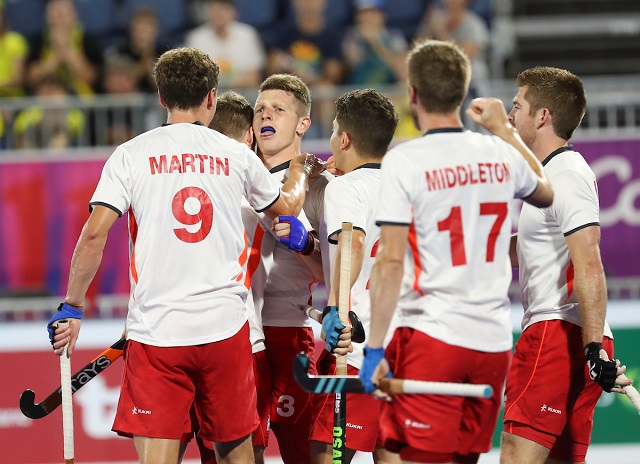 The 27-year-old said: “I’m lost for words and that is really rare! I’m just over the moon and so proud of all the boys and just feel quite tearful!”

“I’d say my goals are down to the boys and the way they’re working at the moment, they’re creating so many chances for me and I’m just happy to be the one on the end of it at the moment!”

“We lost to India late on in the group stages and we were gutted so that was a big learning curve for us. But we are learning on the go and focusing on grinding out results.”

“We put our bodies on the line today and we proved to Bobby that we could do this – it feels fantastic!”