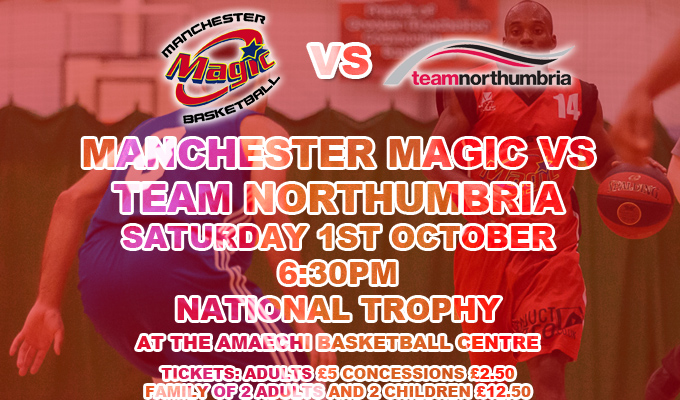 Magic opened their National Trophy campaign with a 99 – 85 win on the road against Bradford Dragons on Saturday.

They make the short trip to face local rivals Lancashire Spinners on Saturday 24th September at 5:45pm at Castle Leisure Centre, before playing at home game against Team Northumbria on Saturday 1st October at  6:30pm.

The following Saturday (8th October) they open their league campaign at home to Westminster Warriors at 6:30pm. 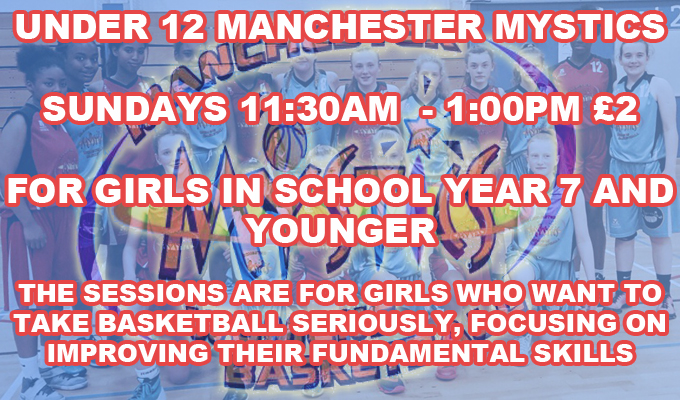 The Sessions are for girls who want to take basketball seriously, focusing on improving their fundamental skills

We had a great start to our Under 12 Mystics Girls sessions last Sunday. Well done to all the girls for their enthusiasm and application. 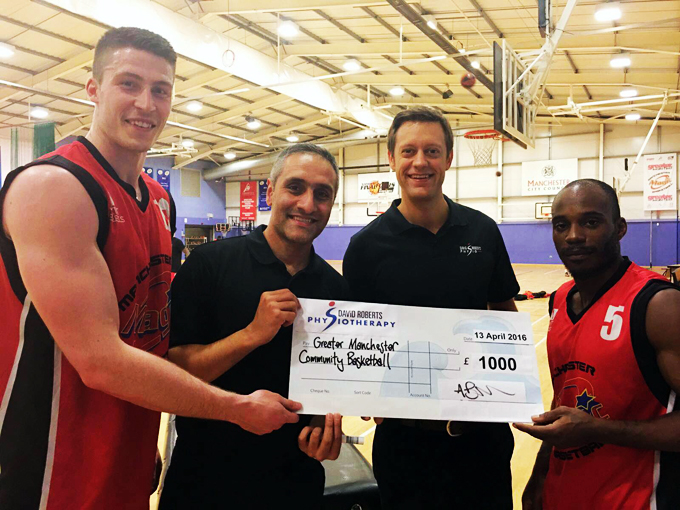 Manchester Magic have ensured their players will be well looked after this season after agreeing a significant sponsorship deal with Dave Roberts Physiotherapy.

The contract will ensure the club gets the medical supplies it needs to cope with what is sure to be another demanding but hopefully successful campaign.

“It is fantastic news to have a partnership with such an established, professional organisation such as David Roberts Physiotherapy,” said Magic coach Paul Middleton.

“Physio support has been such a vital part of our success as a team over the last few years and we are lucky to have two amazing physios in Ali Barvareh and Greg Mylonas.

“To have additional support from David Roberts Physiotherapy is amazing. Both staff and players are very grateful for the benefits that this partnership will bring.”

Andrew Byrne, area manager for Dave Roberts Physiotherapy, said his team are “really excited” to be sponsoring Manchester Magic for the first time this year.

“We have more than 30 years of experience treating the general public and elite sports people,” he added.

“With clinics all over Manchester, we love helping people get back to whatever activity they like to do!”

For more information about Dave Roberts Physiotherapy, which is part of Total Physiotherapy, and the services they provide, visit their website at www.totalphysio.co.uk 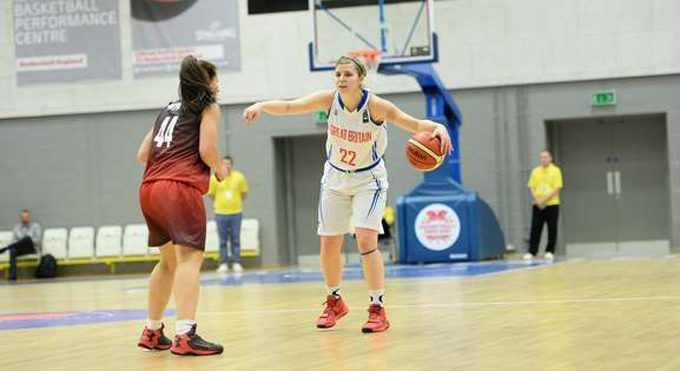 It’s a massive boost for the WBBL franchise, which has recently completed a move to National Basketball Performance Centre in Belle Vue.

Jones, who played for Leicester Riders last season, returns to the club where she began her career and will link up with her father, Jeff, who is head coach.

“It feels great to be back in my home town playing for Manchester again,” said the 26-year-old Jones, who made her debut for the Mystics senior team aged just 14.

“It is where basketball all started for me, so it’s nice to have finally made it back here.

“I’m really excited for the season and seeing what the team can do! “We have a really good group of players all looking to make an impact and to be competitive this year, which will be great for basketball in Manchester.

“A few people have already asked what it is like to be coached by my dad. For me, it’s not unusual because coached me my entire life and knows me as a player better than anyone else.

“I have a lot of faith in him and his ability to get the best out of me, so I’m looking forward to seeing what this season will bring under his leadership.”

Coach Jones says it will be “fun” to have his daughter in the Mystics squad.

“I think every player wants to play for their hometown team and I am looking forward to working to continue her development and pushing her to get better,” he added.

“I hope she will be a big part of bringing about a culture change and the perception of women’s basketball in Manchester. The experiences she will bring to the team will invaluable to the younger players.”

Mystics add Simmons to the mix 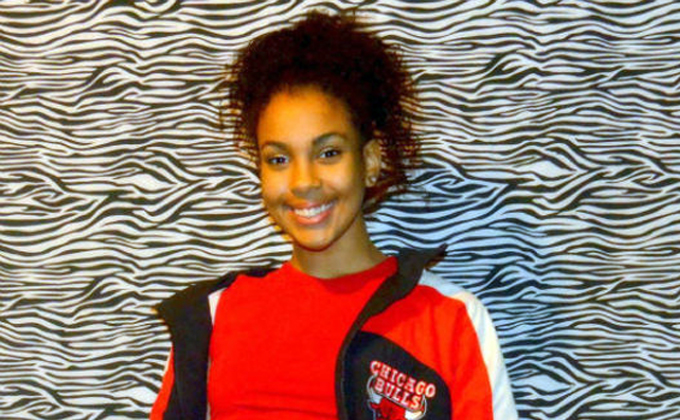 Manchester Mystics have bolstered their ranks with the addition of American-Spanish guard Grace Simmons.

A student at Manchester Metropolitan University, the 19-year-old is with the WBBL squad for the next three seasons.

“I was pleasantly surprised when we were able to secure her services for this new-look Mystics team,” said head coach Jeff Jones.

“The fact that she is with us for three years gives both her and us the time to develop, knowing we have the same end goals for her to get better and for us to become a force in the women’s game.

“You can liken Grace to being a freshman at university and, while in reality she wouldn’t be expected to help right away, she has acclimatised well and is growing in confidence with the senior players.”

Grace added: “I started playing basketball at a young age in Spain.

“In 2013. I went to play basketball in the USA and received a full scholarship to play in high school at Life Centre Academy in New Jersey.

“One of the main reasons I went to play in the USA is because my sister was playing there. I also wanted to play at a higher level and gain experience from playing in a different country.

“The main reason I choose to come and play in England is my education and the opportunity of playing in a different country and to continue growing as a basketball player and as a person.

“My friends found it strange when I said I was going to the UK as opposed to playing at NCAA level in America, but, having been raised in Spain, I appreciate the opportunities that other choices you make can give you.” 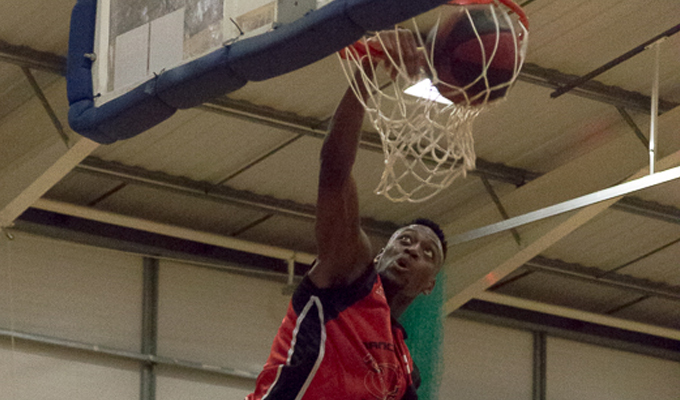 Manchester Magic have confirmed two more signings ahead of the new season, which started this weekend.

Simon Anumba, 20, a key member of the all-conquering Magic team last last season, and Loick Pouale, 22, will be part of Paul Middleton’s squad for the 2016/17 campaign.

Middleton is delighted Anumba, a 6ft 5in forward with an Italian passport, is returning.

“After spending the last few months searching for a scholarship to the USA, I am pleased to say that Simon will be re-signing for the Magic this coming season,” said Middleton.

“He has a scholarship offer from a highly regarded NCAA Division 2 programme, but there has been a delay the process that may see him taking up the offer later in the year.

“Simon has grown as a player and a person over the last two seasons since moving over from Italy with his family.

“He had a major impact last year, starting many games for us and becoming one of our top scorers, rebounders and defenders.

“He is extremely versatile and will be hugely important to our success this coming year.”

Pouale, a 6ft 4in guard, is a former Magic junior who played for Leeds Force in the BBL last season after studying in the United States.

Now a student at MMU, he joins a talented squad looking to defend all four titles they won in 2015/16.

“It is great to see him back in a Magic shirt,” said Middleton.

“Loick started with us in the Under-13 programme many years ago and played in every age-group team, including our Loreto College Academy before leaving for the USA.

“Like Simon, Loick is a player that can be effective on both ends of the floor as he possesses a great athleticism that allows him to make spectacular plays for the team.” 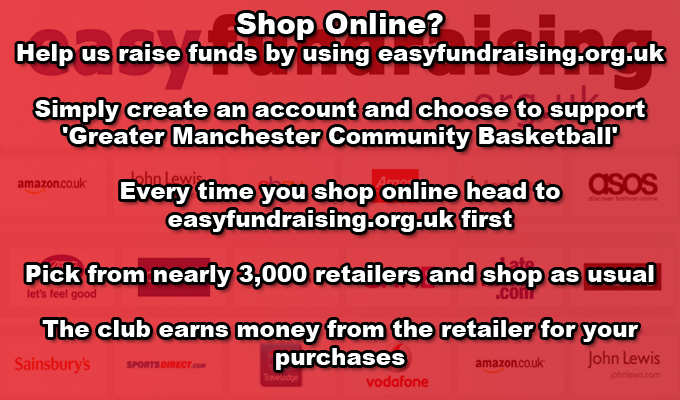 You can even safe money with latest offers sent via email, install donation reminder to your browser and never forgot to donate, remember it doesn’t cost you anything more to do so and the club will benefit massively from the money raised.

There are nearly 3,000 online retailers that are signed up to donate via easyfundraising.org.uk including Amazon, Argos, John Lewis, ebay, Apple Store, asos, Boots, Currys, Debenhams, Game, LateRooms.com, Next, Sainsbury’s, SportsDirect.com, Travel Lodge, vodafone, Hungry House, Just Eat, Jet2Holidays, Thomas Cook, Hotels.com, Thomson and many more, so if you use any shop at any of them please consider helping us, it costs you nothing other than a few minutes of your time.

Fantastic news, we have past £140 raised via Easyfundraising! Thank you to everyone who signed up and helped us reach this mile-stone, join today and help us reach £200! Remember it costs you NOTHING!

Get Your Quadruple Winners T-shirt 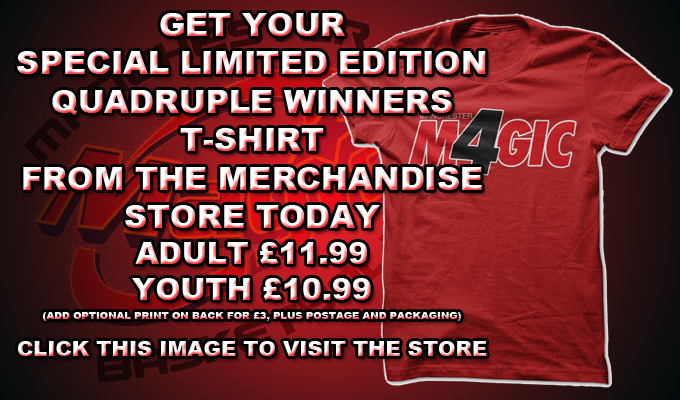 Get your special limited edition quadruple winners T-shirt Today from the merchandise store: http://stockportworkwear.com/magic/
Adults £11.99 Youth £10.99
(add optional print on back “National Cup National Trophy NBL Division 1 League and Play-off Champions 2015-16” for an £3 extra, plus postage and packaging, free pick up available from the store or the Amaechi Basketball Centre) 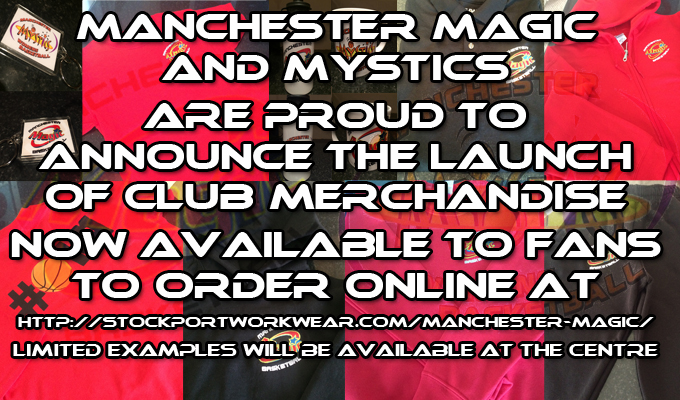 Manchester Magic and Mystics Club Merchandise is available to fans to order online at: http://stockportworkwear.com/manchester-magic/

Limited selection of Merchandise will be available at the Centre at selected times, including during Magic games, examples of clothing will be on display but they are only available to purchase online via the link above. The club gets a percentage of the sales to put back into the club. 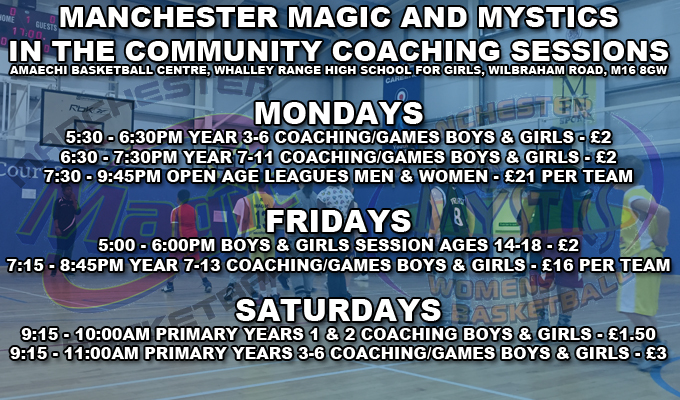 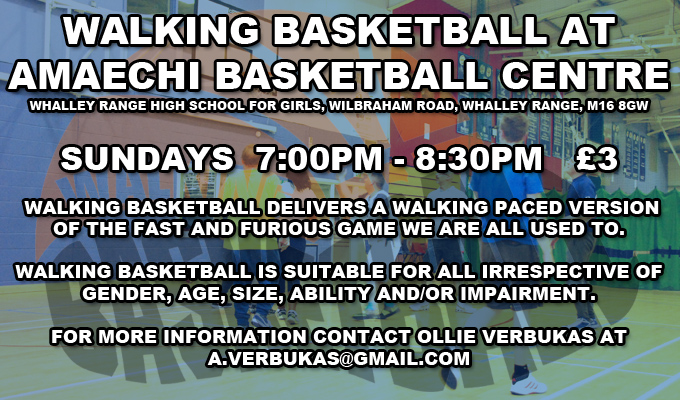 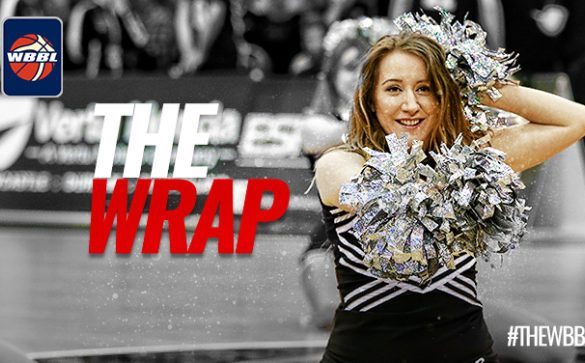 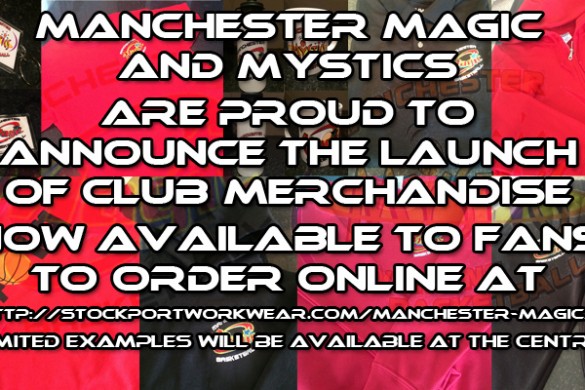