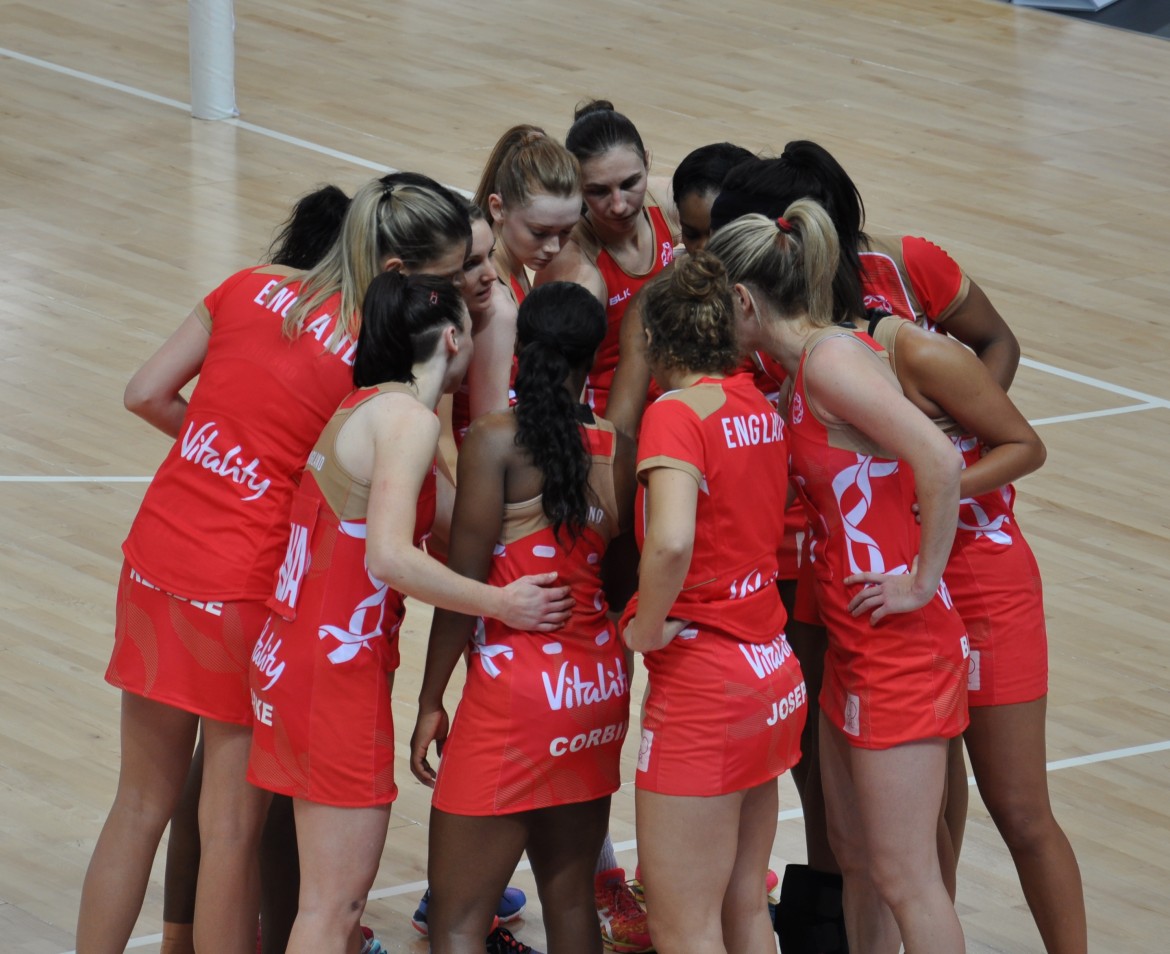 written by TSF
Tracey Neville’s Roses slipped from a four goal lead to lose 60-44 against a determined Australia side at the Copper Box Arena in London.

The match started with the Diamonds a real dominant force taking a five-goal lead before the Roses had even had the chance to put up a shot.

Despite incredible amounts of pressure on the Australian shot from the off with Eboni Beckford-Chambers and Ama Agbeze making the shooters work, England didn’t score until the Diamonds had five in the bag.

The defence took the lead in inspiring the team as Agbeze took an amazing one handed interception to help Rachel Dunn net England’s first goal.

Pressure still from both circle defenders caused Caitlin Thwaites to miss a long range effort but Dunn mirrored Thwaites’ attempt at the other end meaning Australia went 6-2 up.

Play started to go with centre pass as England pulled back possession to make it 8-4, then swiftly 8-6 with some excellent defending from Beckford Chambers to turn the ball over.

The Roses never say die attitude was forced to shine through late in the first quarter as they grasped their chances to bring the score back to 10-all.

Once Tracey Neville’s side had the bit between their teeth they weren’t letting go and the first quarter finished 13-all with England setting their stall out as the comeback queens.

Helen Housby got her eye in early in the second quarter, linking up perfectly with Manchester Thunder teammate Sara Bayman.

Agbeze, who was a rock in the defence for the whole first half did a fantastic job of taking Thwaites to the baseline as the Australian shooter was forced to take the ball out of court.

The defensive pressure proved to be the key for England early in this quarter as they went 18-14 up from taking their turnovers when they had the chance.

Sasha Corbin was always an option for the Roses attack as her signature athletic style of play was a real advantage for the side.

It was at the other end where the action had the crowd rocking as some agile defending at Wing Defence from Jade Clarke helped England back to a three goal lead to take it to 20-17 after Australia battled back to within two.

Shortly after, a nasty fall for Beckford-Chambers meant Jodie Gibson was brought into the Roses defensive circle and with her first touch of the game took an impressive rebound to make the scoreboard tick over at 21-17 to England.

Australia called an injury time out to replace Gretel Tippett with Paige Hadley and move Natalie Medhurst into her preferred position of Goal Attack.

After the break and three failed attempts to score from England, the Diamonds pulled it back to 21-all in determined fashion.

The Roses attack went through another patch of miscommunication and Australia took full advantage to regain their lead at 23-21.

An uncharacteristic wayward pass from the experienced Medhurst gave England the chance to close the gap on the world’s number 1 side, but the previous game’s player of the match Sharni Layton denied them the opportunity.

The first half finished with England trailing by 25-23 after losing their lead but still firmly in the game and with the enthusiastic Copper Box crowd in full voice.

As the sides came back for the action of the second half it was all change for the Roses as Clarke moved into Wing Attack, with Laura Malcolm taking her Wing Defence bib.

The opening moments of the quarter spelt chaos for both sides as possession changed hands on numerous occasions, and although the Diamonds went 32-26 up, the Roses showed flashes of brilliance.

Haythornthwaite linked up with new Superleague teammate Bayman to cause the Australian defence some problems.

But it was Australia who maintained their dominance with Medhurst and Thwaites taking all their chances.

The score soon moved to 39-31 as Layton was confident as ever picking up long-range interceptions for the Diamonds.

Australia took their lead up to 10 with the score line sitting at 43-33 with a minute to go, and at the whistle for the end of the third quarter, Neville’s Roses trailed by 44-33.

The Roses stepped out onto court for the final quarter with Rachel Dunn back in at Goal Shooter, replacing Housby. Clarke moved into Centre with Corbin back in her Wing Attack bib.

The England pressure told straight away as the Roses turned over the Australia centre pass leaving Haythornthwaite to score two in a row to make the score 44-35.

With the score at 49-37 England started to lose their opponents and the score quickly moved to 53-37 as the Diamonds started to turn the screws.

Australia Goal Attack Medhurst lost her trainer in a comical moment with six minutes remaining and the score at 54-38.

Some impressive passing from Corbin gave the Roses fans something to cheer about with two minutes of the game remaining as Dunn slotted home to take it to 59-42.

One thing’s for sure, the younger players in the England set up are impressing on the national stage and will see this as a huge learning curve against the best the world has to offer.

Layton was once again the Vitality Netball International Series Player of the Match after another commanding display in the Australian defence.