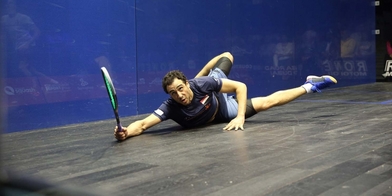 It was a late finish on quarter-finals day on Good Friday at the Allam British Open in Hull as the semi-finalists were decided.

Defending Allam British Open champion Mohamed Elshorbagy safely secured his passage into the semi-finals with a strong 3-0 victory over Colombia’s Miguel Angel Rodriguez in Hull’s Airco Arena. Rodriguez put in a valiant display but, despite some excellent retrieval skills and a trademark dive wowing an enraptured crowd, Elshorbagy’s class shone through as the World No.1 powered through to the win in straight games.

Karim Abdel Gawad dashed the hopes of an all Elshorbagy semi-final, triumphing over Marwan 3-1 in a grueling encounter that lasted nearly 90 minutes. The World no.7 sets up a tie with Mohamed Elshorbagy for a place in the final on Saturday.

World Champion Gregory Gaultier moved into the semi-final of the 2016 Allam British Open with a deceptively hard-fought 3-0 victory over Germany’s Simon Rösner – extending his winning streak over the 28-year-old to five matches. Both players came into the tournament struggling for fitness and it was Gaultier who took control, looking very composed on court moving through to the semi-finals where he will face Ramy Ashour in what’s sure to be a mouth-watering clash.

Egyptian maverick Ramy Ashour put on an an accomplished display against compatriot Ali Farag to book his place in the semi-final of the 2016 Allam British Open. It was the first time Ashour and Farag have met in a competitive match it was close encounter. However, Ashour’s quality showed through as he recorded the win, a result that sees the 2013 champion into last four of the British Open for the first time in two years.

Defending Women’s Champion, Camille Serme ended the title chances of World no.1, Laura Massaro, with an assured display, claiming the match in straight games in a repeat of the 2015 final. She sets up a tie with the 18-year-old Gohar for a place in the final.

World Junior Champion Nouran Gohar will appear in her first ever Allam British Open semi-final after a huge win over close friend and fellow Egyptian Raneem El Welily in a thrilling quarter-final fixture. A captivated crowd inside Hull’s Airco arena were treated to an entertaining match played by two of the world’s biggest talents.

Five-time winner Nicol David secured her semi-final berth in the Women’s 2016 Allam British Open, after coming through a difficult fixture with Omneya Abdel Kawy to win 3-1. Malaysian icon David sets up a semi-final meeting with World No.5 Nour El Sherbini against whom she has lost to on the last three occasions.

Egypt’s Nour El Sherbini booked her place in the semi-final of the Women’s 2016 Allam British Open with a dominant performance over Amanda Sobhy in the Hull as she continues her quest to win her first title at the prestigious PSA World Series tournament. The pair’s last meeting saw Sobhy lose out to El Sherbini in the final of January’s J.P. Morgan Tournament of Champions and it was no different in Hull as Sherbini recorded a straightforward win to advance.

Saturday is an action packed day with the finalists decided on the showcourt inside the Airco Arena.

Keep up to date with all the news on the Allam British Open website.