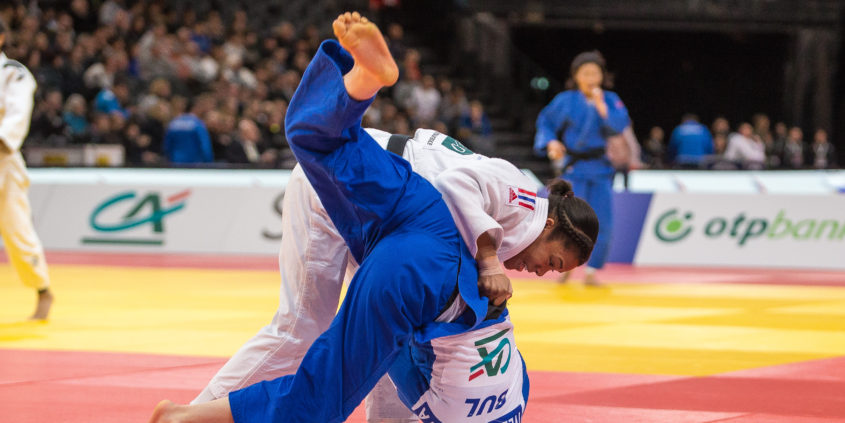 A gruelling Final against Hungary’s Hedvig Karakas that lasted over three minutes of Golden Score saw Smythe-Davis score a vital waza-ari to begin the celebrations. She found herself an early waza-ari score down as she struggled to get to grips with her opponent.  It wasn’t until the final 30 seconds of regulation time that she was able to find a scoring combination that levelled the pulsating -57kg final.

The Gold medal win sees Smythe-Davis pick up 1000 World Ranking Points and should see her rise up into the Top three of the World Rankings for the first time.

Smythe-Davis looked immediately at ease on the mat at the ISS Dome as she claimed opening round victory against America’s Shadi Ebrahim in under 90 seconds. Following a waza-ari in the opening 10 seconds, a lovely throw from the Ealing Judo Club fighter saw her end the contest.

Spain’s Joaine Equisoain proved no match for Smythe-Davis in her current form and constant pressure from the Brit saw her Spanish opponent pick up three shidos, with the third coming in Golden Score.

It was a quickfire Quarter Final for Smythe-Davis as she again secured victory in under two minutes, this time at the expense of Mongolia’s Enkhriilen Lkhagvatogoo.

She displayed a different style of judo to win her Semi Final though as she secured victory over France’s Sarah Ieonie Cysique via newaza. It was another quick win for the Brit which saw her stay fresh for the Gold medal contest.

It was a Fifth place finish for Ashley McKenzie in the -60kg category. Following up on his Bronze medal victory in the Paris Grand Slam, McKenzie was in fine form throughout the day. He left himself open in the Bronze medal contest and found himself on the wrong end of a Tai Otoshi to give Russia’s Lukhumi Chkhvimiani the win.

McKenzie’s opening round opponent, Kazakhstan’s Yerzhan Yerenkaiypov, was making his debut on the IJF Circuit so he would have known little about him. It was a cagey contest from both fighters but one that McKenzie exerted enough pressure to force his inexperienced opponent to pick up three shidos.

Slovenia’s World No.35 Matiaz Trbovc stood in McKenzie’s way of reaching the Quarter Finals. It was a tight contest throughout but a strong move by McKenzie in Golden Score saw him register a vital waza-ari score.

It was a frustrating Quarter Final for McKenzie as he picked up three shidos against Russia’s World No.5 Robert Mshvidobadze. He managed to pull himself together to win his Repechage Final against France’s Richard Vergnes, an opponent he defeated on his way to securing Paris Grand Slam Bronze two weeks ago.

It was a disappointing morning for both James Martin (-66kg) and Kelly Staddon (-48kg) who both lost their opening round contests. Kelly Staddon came quickly out of the blocks early on against Amber Gersjes (NED) and dominated the grip throughout. She just left herself open in Golden Score and Gersjes took her chance to throw for ippon.

Martin, making his Grand Slam debut, immediately looked at ease with his opponent Artur Te (KZG) but his contest went to Golden Score and the experience of Te showed as he was able to register waza-ari to end the contest. 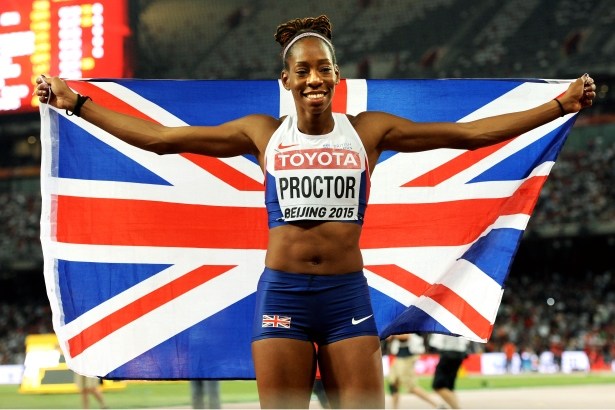 World Long Jump silver medallist Shara Proctor (coach: Rana Reider) will make her first appearance of the 2016 season at the PSD Bank Meeting in Dusseldorf tonight with four other Brits in action.

Proctor, who leaped a personal best of 7.07m in Beijing last August to claim a world medal behind Tianna Bartoletta (USA), will face a strong field in Germany, which includes world bronze medallist Ivana Spanovic (SER).

The men’s 60m hurdles will be one of the events of the evening as Lawrence Clarke (Samba-Koundy Giscard), faces Orlando Ortega (CUB) as well as European 60m indoor silver medallist Dimitri Bascou (FRA). Desiree Henry (Reider) begins her 2016 season in the 60m taking on Olympic and world 4x100m relay medallist Jeneba Tarmoh (USA).

The Dusseldorf Meeting will be televised live on Eurosport