Christie and Gilmartin return from the team who competed at Sochi 2014, with triple World Champion Christie competing in her third Games, while Thomson, Cheetham and Treacy will all make their Olympic debuts in PyeongChang.

Along with the world titles, Christie has 10 European crowns to her name and last year became the world record holder over 500m.

Gilmartin has collected European and World Cup medals over the last year, making significant year-on-year improvements since Sochi 2014, while 21-year-old Thomson has consistently qualified for quarter and semi-finals of World Cup events.

Following a number of changes in the men’s team since Sochi 2014, the next generation of British male athletes are making a name for themselves at world level with results enabling both Treacy and Cheetham to secure spots in the 1000m event.

Elise Christie said: “It’s been a great end to the World Cup season for me and a relief after a tough season with injuries. I can’t wait to get back out to Korea and compete again at the stadium in front of the crowds there who are amazing, and I’m really looking forward to being part of Team GB again after four years.”

Kathryn Thomson said: “It feels amazing and incredible to be selected. I’m so proud to be able to say I’ll be representing Team GB at the Games. I am looking forward to being part of something so huge, with big crowds and support, I know it will be a great experience.

Joshua Cheetham said: “It feels surreal, I’ve wanted this from such a young age, and I’ll be doing it for myself, my family as well as Great Britain. I feel a lot of pride, and responsibility to do my best and enjoy it. Short track is the biggest sport in Korea, and they have such enthusiasm for it so I’m looking forward to seeing how they present it to the world.”

Farrell Treacy said: “This is a dream come true and something I’ve always wanted since starting short track speed skating. It’s been an aim for me to get to the Games particularly in the last four years since Sochi.  There has been heartache and success along the way, so it feels amazing to be selected.”

Short Track Team Leader Stewart Laing said: “We have a really great group of athletes who have performed well this season to be selected for PyeongChang. We have a mix of experience through Elise and Charlotte who have been to Olympic Games previously, and first time Olympians in Kathryn, Josh and Farrell.

“We’re extremely excited to be fielding our women in all events, which demonstrates the strength of our female programme, and anticipate that the boys will be able to gain as much experience as possible with the aim of medalling in Beijing 2022.

“This team announcement is an accumulation of multiple years’ worth of work put in by the athletes and the coaches. We look forward to finishing our training preparations at the National Ice Centre in Nottingham before heading out to Seoul for our pre Games preparation.”

Team GB Chef de Mission Mike Hay said: “Short track is going to be one the showpiece events at PyeongChang 2018, played out in a country with a huge passion for the sport. For our five athletes, competing in South Korea in February will be an incredible experience and just reward for their efforts to qualify and be selected to Team GB for the Winter Olympics.

“The team is a great mix of talent, experience and debutants and I’m sure the nation will be getting behind them as they bid to take on the world’s best next year.” 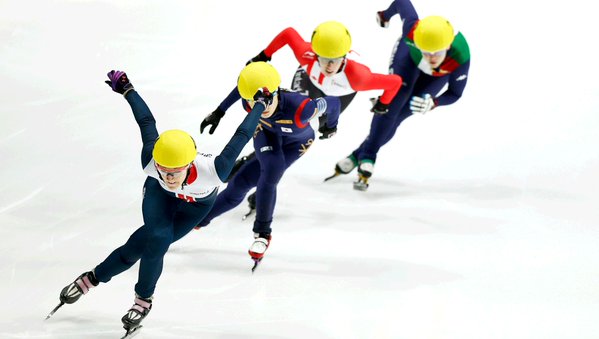 This weekend saw Elise Christie become the first British female to finish on the overall World Short Track Speed Skating podium after winning 1000m silver and bronze in both the 1500m and the 3000m in Seoul.

That saw her secure an overall world ranking of third, but despite re-writing the history books Christie insists she is in no mood to slow down.

Fresh from winning the overall title at the 2015 European Championships – as well as gold in the 500m, 1000m and 1500m – Christie arrived in South Korea full of confidence.

To view the whole article please follow the link below 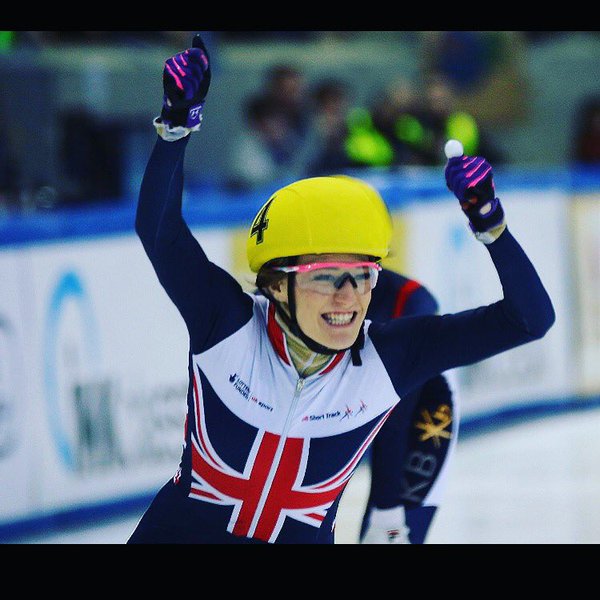 Elise Christie couldn’t hide her delight at getting one over her close rival Minjeong Choi at the World Cup in Dresden.

Christie, who won the overall European Championships in Sochi last month, took gold in the 1500m in 2:41.20 minutes ahead of South Korean pair Choi and Alang Kim.

So far this season only Choi and Shim Suk-hee had claimed gold over the 1500m distance.

And Christie, who also qualified for Sunday’s 500m quarter-finals alongside Britain’s Charlotte Gilmartin, was thrilled to pick up her fourth World Cup medal of the season.

“I’m thrilled and shocked with the outcome for the 1500m as this isn’t my strongest distance,” said the 25-year-old.

“That’s the first time in my career I’ve beat Minjeong Choi, it won’t be the last. I’m really looking forward to tomorrow and the 500m and feel I’m in good form.”