Keri-anne Payne and Jack Burnell have today been named by the British Olympic Association (BOA) as the two marathon swimmers who will represent Team GB at the Rio 2016 Olympic Games.

Rio 2016 will be a first Games for Burnell, who earned his place after securing a named quota spot for Team GB with a fifth-place finish at the 2015 World Championships.

It will be a third Olympic Games for Payne, having won silver in the open water marathon swim at Beijing 2008 – where she also competed in the pool – and finishing fourth at London 2012.

Their inclusion in Team GB brings the total number of selected athletes for Rio 2016 to 130 from 11 sports – with 30 of those in the aquatics disciplines following the previous announcements of 26 pool and two synchronised swimmers.

The aquatics squad will be finalised tomorrow when the divers selected to Team GB will be announced.

“I want to congratulate both Jack and Keri-anne on their selection today to Team GB, and with 50 days to go it’s great to be able to finalise a very strong swimming squad heading to the Rio 2016 Olympic Games this summer.

“Keri-anne is an extremely experienced athlete, who already has an Olympic silver medal to her name, and it’s a fantastic achievement to be selected for her third Olympic Games.

“It will be Jack’s Olympic debut, deservedly achieved through his strong performances over the last 12 months. He’s showing great promise and I’m sure he will want to impress at Rio 2016 along with the rest of the squad.”

“It’s great to have both Jack and Keri-anne included in Team GB to swim the Marathon in Rio.

“They have followed very different routes to achieve their selection – Jack swam a great race at the World Championships in Kazan last year to earn his selection and Keri-anne swam a perfectly judged race last weekend to secure her spot. “Both are now seasoned campaigners on the World Cup circuit and have learnt a lot from swimming in the Olympic test event off Copacabana beach. I am sure they will both do us proud again this year.”

“Becoming an Olympian is the pinnacle of anyone’s sporting career and a privilege, and for me to get to that stage a year out from the Games has helped massively. Qualifying so early has enabled me to have a perfect preparation for my first Olympic Games. It’s a massive achievement for everyone who has been involved in helping me to make the team but it’s not just about attending, it’s about being in Rio and getting the job done.”

“To be on the Olympic team is an enormous honour and to do it for a third time feels like a huge bonus for me and my team. My vision was to stand on the starting line in Rio as the most well-rounded open water swimmer. We’ve taken a fun and unorthodox approach, I’ve loved it and looks like it has paid off.” 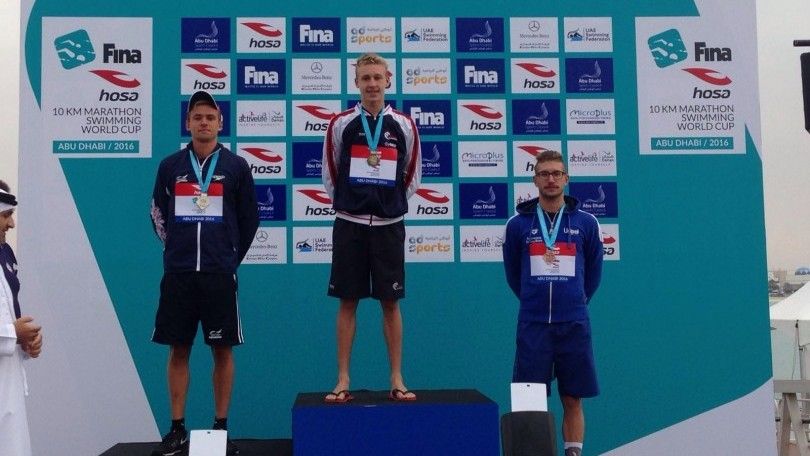 Jack Burnell won a hard-fought silver medal in his first race of the season when he led the British contingent home at the FINA/HOSA 10km Marathon World Cup race in Abu Dhabi.

The National Centre, Loughborough athlete finished on the podium behind Marc Olivier from France and was at the top of a large, chasing pack to take the silver from Simon Ruffini of Italy.

In the women’s event former world champion and Olympic silver medallist Keri-anne Payne was the first British athlete home and was agonisingly close to a medal. The Warrender swimmer finished fourth – less than half-a-second from a place on the podium.

In the men’s event Caleb Hughes and Toby Robinson (both National Centre, Loughborough) finished 21st and 55th respectively from a field of over 80 male swimmers while Danielle Huskisson (University of Stirling) and Sophie Evans (City of Swansea) were 14th and 36th from a field of over 55.

The World Cup circuit comprises of seven races across the World from Argentina to Hong Kong. The race was the second on the FINA/HOSA World Cup calendar and will be an early season test for the swimmers.