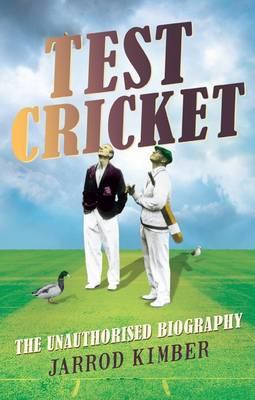 So I wrote another book.

It’s about the entire history of Test Cricket. All of it. Every single ball.

It’s stories, and cricket, and things that combine both.

It is like a history book, if written by me.

It is the story of a beautiful sport that brings so much joy to people’s lives but is beset on all sides by the iniquities of the selfish and the tyranny of evil men.

That turns out to be a pretty good story.

There was a bloke with a beard that touched his belly.

Then a killer Jamaican dentist.

Then a flock of Hadlees.

Then a future superpower.

Then the Rachael HEYHOE Flint.

And then joyful Bangladesh.

Sure, some other shit has happened. Rich white dudes fenced off the sport. Others fenced out black folk. Others called them for chucking. Some stole money off women and only let single ones play. The game was used by racists, by dictators, by assholes with fancy titles. There was also some fixing, some shooting, some jailing, that went with it.

But the game itself, it keeps going, it keeps fighting, it keeps hooking away the worst of humanity. It’s like Langer against Shoaib. McCabe against Larwood. Every single spinner ever against Viv Richards.

There will be things in here you have never heard of. Things that you know better than you know that weird mole on your cheek. And things that you had only heard in passing that will make you cry. This is not the story of the people who played the game; this is Test cricket’s story.

Our best friend, our inspiration, the thing that gets us moist in groin or eyeball.

In true cricket style, it has a weird, almost unplayable release.

In Australia you can get it in book stores, or just here.

And for the world, it’s only on Kindle only at the moment.

But buy it. Tell everyone you know to buy it. If you can’t buy it, find someone to buy it for you.
Source: http://cricketwithballs.com/