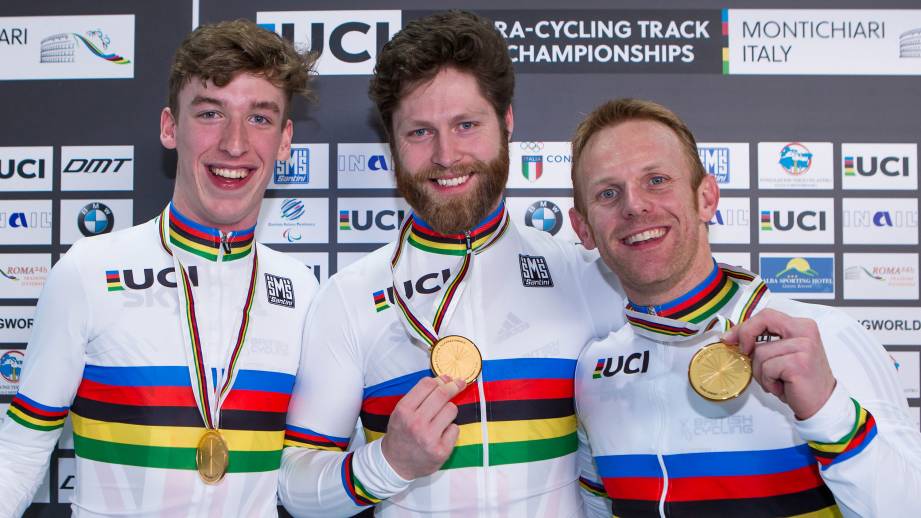 There were two more world titles for the Great Britain Cycling Team adding to the squad’s medal haul on the final day of the 2016 UCI Para-cycling Track World Championships on Sunday.

In a day dominated by sprint events, there was a first world title for 18 year old Louis Rolfe, alongside Jon Allan Butterworth and Jody Cundy. Rolfe, a C2, was a late replacement in the event for Kadeena Cox, who earlier this week was reclassified as a C4 meaning she could no longer ride in the team sprint.

After qualifying fastest in the morning the Great Britain team were up against China in the afternoon’s final, and not only did they win, but they did so in style, setting a new world record time of 49.268.

Jon-Allan Butterworth was delighted with the performance.

“It’s nice in a big competition – especially with Louis being so young to get a hit out now – purely to give him confidence. We can start to rely on him as well.

“We did no practice with him (Louis), just literally that team sprint we did in September (at the British Cycling National Track Championships) and bang we knocked it out the park. We did a 50.1 this morning which qualified us fastest, which was a surprise and then to go nearly a second quicker than that this afternoon was just outstanding. Gold medal, world record, can’t really complain.” 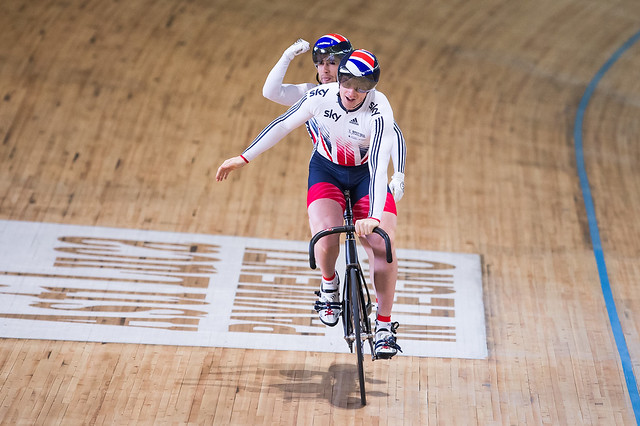 Neil Fachie and Pete Mitchell won gold in the men’s tandem sprint to add to their win in yesterday’s kilo. They looked untroubled throughout the course of qualifying and went unbeaten all day after qualifying fastest.

Mitchell was pleased to continue a long undefeated streak.

“Absolutely over the moon. We’ve been undefeated for a little while so to keep that record going is fantastic and the form we showed today – the first ever sea-level sub ten second ride is a goal we’ve been chasing for quite some time so to nail it felt really really good.”

Mitchell added that they would now turn their attention towards Rio.

“We’ve got a load more to try over the next six months. The build up to Rio will be completely different to this so I think there’s plenty more to come which is exactly what we need.”

There was also a bronze medal for James Ball and Craig Maclean in their first world championships together, the pair comfortably beating the Spanish pairing of Jose Porto Lareo and Jose Escuredo Raimondez in the bronze medal final.

Sophie Thornhill and Helen Scott were also in action in the women’s tandem sprint. After qualifying second fastest in the morning, the pair progressed serenely through to the final where they faced the Australian pair of Jessica Gallagher and Madison Janssen.

Unfortunately, though, the Australian tandem were too good winning the final 2-0 with Thornhill and Scott taking home another silver medal to add to their silver in yesterday’s kilo.

Earlier in the day there was a brilliant performance from Jon Gildea to take a silver medal in the C4/5 scratch race.

“I always believed I could get a result, so it was nice to go out and do myself justice really, about time isn’t it?!” said Gildea.

“It was really special to come over the line there – to be fair I did think I’d won, but the sneaky Australian had got an extra lap there. But still well chuffed to get a silver medal.

“A massive result and a happy end to the trip really.”

The Great Britain Cycling Team topped the medal table with a final tally of eight gold medals, six silver and four bronze. Throughout the course of the week there were stunning performances from across the team.

C3 rider Megan Giglia was the star of the first two days taking home rainbow jerseys in the individual pursuit and 500 metre time-trial. There was a 23rd world title for Dame Sarah Storey, while Kadeena Cox overcame the disappointment of being reclassified as a C4 to obliterate the field and become a world champion in cycling and athletics. Neil Fachie is now a ten time world champion after winning two more this week, while Jody Cundy also won gold in the kilo to add to today’s team sprint win.