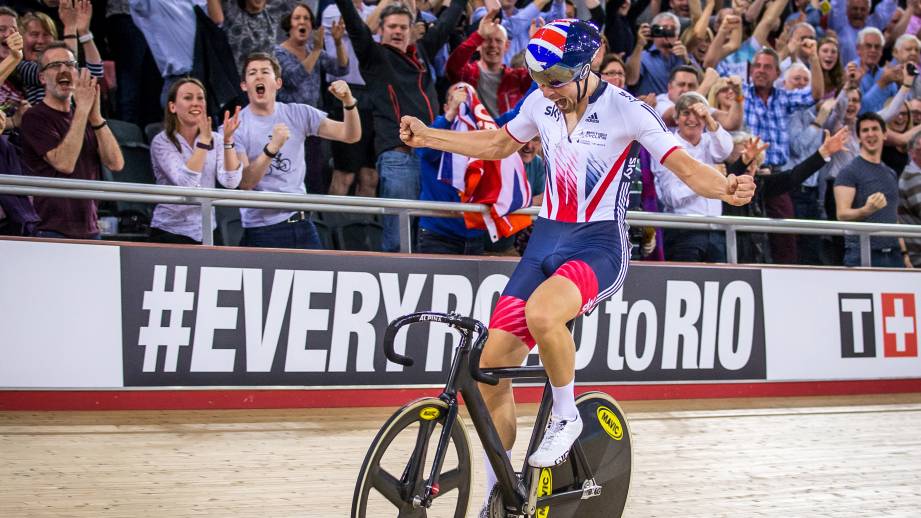 The 22-year-old pulled on the rainbow stripes for the first time in his career after a thrilling points race – sealing victory by taking the final sprint.

Backed on by the home crowd, Dibben took a lap early on and remained in the medal hunt for the majority of the race. But with three sprints remaining, strong rides from Austrian Andreas Graf, Belgian Kenny de Ketele and Frenchman Benjamin Thomas – looked like squeezing Dibben out of the picture.

The Southampton rider had other ideas though. Spurred on by his silver medal in the team pursuit yesterday, he won the 15th and 16th sprint in deafening conditions to become Great Britain’s newest world champion.

Speaking to the sold out crowd who’d roared him to victory, a visibly emotional Dibben said: “Winning a world title in your home country – it doesn’t get much better!”

The women’s team pursuit quartet of Laura Trott, Joanna Rowsell Shand, Elinor Barker and Ciara Horne bounced back from the disappointment of missing out on gold by qualifying in fifth place on Thursday with two sensational rides to earn bronze – and a new national record.

They followed that up with a bronze medal winning ride of 4:16.540, beating New Zealand to third place by almost four seconds.

The gold medal was won by the United States in an all-North American final against Canada in a time of 4:16.802.

“We’ve got five months’ hard work. The Aussies came away fifth after having won last year. They’re going to come back fighting. It’s going to be all to play for.

“I think it’s going to be one of the best events of the games. Watch out, we’re going to be back going for that gold.”

Meanwhile Andy Tennant claimed a second medal of the week as he beat Owain Doull in a battle of the Brits in the individual pursuit.

The British champion won his first individual world championships medal, beating his younger teammate by just 0.175 seconds as he posted a time of 4:18.476 with Doull unfortunate to miss out on a medal after a fifth 4km dash of the week.

The gold medal and the rainbow stripes went to 19-year-old Italian Filippo Ganna in 4:16.141.

The stage has also been set for potentially more medals to come on Saturday after strong showings from Jason Kenny, Callum Skinner and Mark Cavendish.

The Manx Missile sits in sixth place at the halfway point of the omnium. He saved the best for last, taking second place in the elimination race, his final event of day one, to add to a sixth place finish in the opening scratch race, and 13th in the individual pursuit in a time of 4:27.453.

With the kilo, flying lap and points race to follow, Cavendish has 84 points, 20 behind current leader Elia Viviani of Italy.

In the men’s sprint, Kenny and Skinner safely secured places in the quarter-finals after a morning of convincing performances at Lee Valley VeloPark.

22-year-old Skinner claimed the scalp of reigning world champion Gregory Bauge – who had to earn his quarter-final birth through the repechages – with a gutsy and powerful ride in the 1/8 finals.

Katy Marchant followed up fifth in the team sprint with another fifth place – this time in the 500m time trial. Her time of 34.032 was more than half a second quicker than the time she clocked on her world championships debut in Paris last year – an improvement of eight places in the rankings.

The 500m title went to Russian world record holder Anastasiia Voinova in 32.959 – the only rider to dip under the 33 second mark.