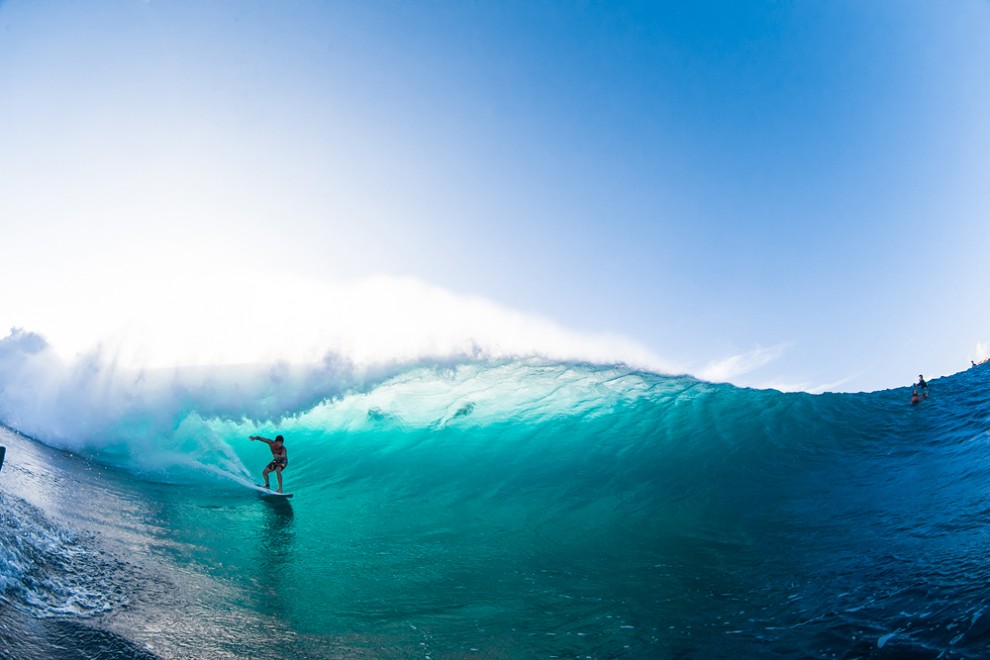 As you probably already know, SURFING’S March issue is adorned with a vibrant photo of 36-year-old Kauaiian native, Mr. Bruce Irons. Mouth agape, fingers creepy, riding a fiberglass homage to his late brother on a flaring Pipeline beast — I’m not sure this image could exude any more Bruceness. Below, Bruce talks Pipeline, new sponsorships, and a bright future. —Michael Ciaramaella

SURFING MAGAZINE: So you’re on the cover of SURFING Magazine…tell me about that day.
BRUCE IRONS: I watched it all day long, but it was kinda wonky. I rented a house at Pipe for 6 weeks, I didn’t have a sponsor so I was just gonna stay at Pipe. That was the first day of waves for two weeks so it was kinda backwashy. I went out at 4:30 and just waited, waited, waited, waited and that was the only wave I caught. It wasn’t very good that day, I just lucked out.

You said you got a house at Pipe this year, was it your goal to have a big winter out there and pick up a sponsorship?
Yeah I had no main sponsor, and I was telling some people, “This is what I’m doing. I’m going to Pipe, I’m not gonna miss a fucking swell. I’m gonna be on it.” I knew as long as I was there at Pipe, ya know, not missing anything, just being relevant, something good was gonna happen. And then yeah, RVCA came along and it happened like 3 weeks into the house

The influence behind the tribute. Andy Irons, and the iconic rising sun board at Pipeline. Photo: Brian Bielmann

Are you there now for the Backdoor Shootout?
Yeah, I’m staying at the RVCA house at Off the Wall. It’s me, Fuller, Betet, Zak Noyle, Jay Davies. Yeah it’s sick, all the boys.

You planning on staying there all winter, trying to catch some more Pipe?
Yeah I’ll be here as long as they have the house, I think til the end of February. I’m gonna be doing the Shootout, Sunset, and then the Volcom contest as well. I’m not leaving the North Shore until the waves are done. I mean, unless somewhere else is good…

Any plans for the rest of the year?
Yeah where we going? Let’s get a trip going! Haha but yeah, my buddy Logan is making a movie, Snapped III, we started filming for that already so we’ll be filming… for however long it takes. Guys are already making their parts good, like Jordy, Josh Kerr, it should be sick.

Sounds like you’re super motivated to get out there and surf and compete right now.
Yeah, I’m psyched… on surfing! I went through years of shit in my life and finally processed it… my brother dying, other personal shit. And yeah you know, I’m stoked I’m with a good company and I’m psyched on surfing. I’m stoked.

Back on the cover!
Yeeeeah back one the cover, didn’t think that was gonna happen for a little while hahaaaa
Source:  http://www.surfingmagazine.com/news/135025/#tlRX9s8TvdcZpXK2.99