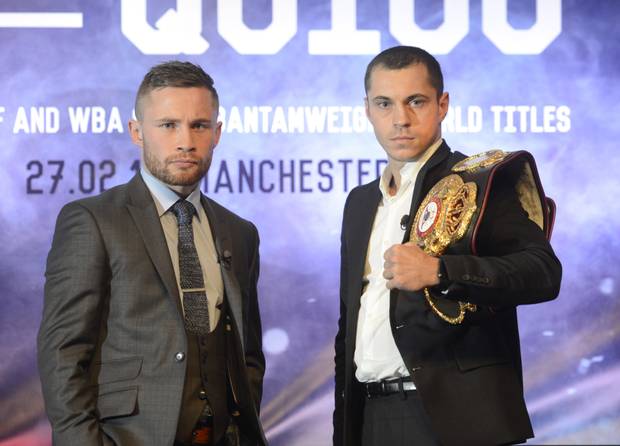 Carl Frampton and Scott Quigg clash for the IBF and WBA super bantamweight titles at the Manchester Arena on Saturday February 27 and you can follow the build-up with all the big fight news, odds, tale of the tape, fighter records, running order and more.

This is why Scott Quigg and Carl Frampton are the best fighters in the bantamweight division.

Tickets sold out in minutes for this England v Northern Ireland clash and there has been no shortage of pre-fight verbal sparring between the two fighters, who put their respective IBF and WBA titles on the line, as well as their respective trainers Joe Gallagher and Shane McGuigan.

Right here we have , news from both camps, predictions from the world of boxing, features, fighter records and statistics as well as the tale of the tape, the full card running order, plenty of video interviews and details of how to watch the Sky Box Office Event.

More will appear right here as Saturday night’s thrilling card draws ever closer so stay with sportinglife.com for all the essential big fight content.

Here is the running order as it stands, starting with the latest at the top of the list: