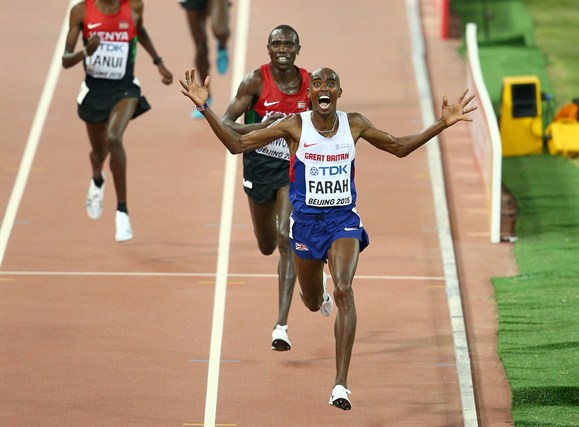 A total of 43 world and Olympic medallists, including Great Britain’s Olympic and world champions Mo Farah (coach: Alberto Salazar) and Greg Rutherford (Dan Pfaff) will compete at the Glasgow Indoor Grand Prix, the final stop of the IAAF World Indoor Tour at the Emirates Arena on Saturday 20 February.

Farah will compete against a strong international field in the 3000m including Kenya’s Paul Koech, Conseslus Kipruto and Augustine Choge, whilst Rutherford faces Paralympic F44 champion Markus Rehm of Germany in the long jump.

The women’s equivalent also features an exciting head-to-head as Britain’s fastest woman Dina Asher-Smith (John Blackie) goes up against world 200m champion Dafne Schippers of the Netherlands. Jamaica’s Elaine Thompson, who won 200m silver behind Schippers at the World Championships in Beijing last summer, Michelle-Lee Ahye of Trinidad and Tobago and new European junior record holder Ewa Swoboda will also be ones to look out for in the women’s 60m.

There will be a strong British presence in the women’s 60m hurdles as European 100m hurdles champion Tiffany Porter (Rana Reider) is joined by European indoor silver and bronze medallists Lucy Hatton (Jerzy Maciukiewicz) and Serita Solomon (Michelle Bovell). Their international opponents will be led by world 100m hurdles silver medallist Cindy Roleder of Germany and current world number one Kendra Harrison of the USA.

The Scottish crowd will be sure to get behind local star Laura Muir (Andy Young), who went to second on the British 1500m all-time list behind Dame Kelly Holmes with a run of 3:58.66 in Monaco last summer. She will compete in the 800m at the Emirates Arena.

Niels de Vos, Chief Executive of British Athletics, said: “This line up illustrates why the Glasgow Indoor Grand Prix is the best indoor athletics meeting in the world. The Scottish fans are in for a fantastic day with so many stars of the sport from across Britain and abroad. I’m sure that this event will showcase Glasgow’s abilities to stage world-class events.”

Paul Bush OBE, VisitScotland’s Director of Events, said: “We are delighted that many of the world’s finest athletes, including UK superstars Mo Farah and Greg Rutherford, are set to compete at the Glasgow Indoor Grand Prix, the most prestigious indoor meet of 2016.

“Their decision to compete in Glasgow in this all-important Olympic year is a reflection of Scotland’s status as the perfect stage for events, and we are certain all competitors are in for an enthusiastic reception from spectators in Glasgow on February 20.”

Full start lists for the Glasgow Indoor Grand Prix will be available on britishathletics.org.uk on the afternoon of Tuesday 16 February.

The Glasgow Indoor Grand Prix is the number 1 ranked indoor meet in the world of athletics. Find out more by visiting britishathletics.org.uk and follow us on Facebook and Twitter @BritAthletics