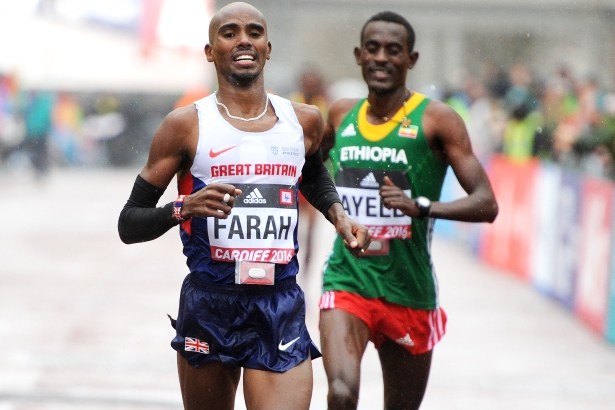 The rain was lashing down in the closing stages of the elite men’s race and with the first two positions filled by Kenya’s defending champion Geoffrey Kamworor and Bedan Karoki Muchiri, Farah, European record holder had to put in a sprint finish to claim the bronze medal.

Kamworor won in an impressive 59:10, with Farah finishing just under the hour mark in 59:59 to become only the second Briton after Carl Thackery to win individual bronze at these championships.

Farah spoke afterwards: “I am a little disappointed today. There was great support from the home crowd so it would have been nice to have come away with a win. The better athlete won on the day, they went for it and I could not quite go with it.

“It was an incredible pace, from the 10km splits you can see they were going for it. For quite a bit of the race I was alone. It was a fast time but as an athlete, you always want to win.

“Rio (Olympic Games) is always the aim. The guys are going to be stronger, so I am going to work hard and this gives me massive motivation.”

Callum Hawkins (Robert Hawkins) finished in a superb 15th place in a time of 1:02.51 taking some notable scalps. He admitted that the rain ended any chances of a personal best but was still happy with his performance in a British vest.

Five-time Welsh Cross Country champion Dewi Griffiths (Kevin Evans) was delighted to earn a personal best of 1:04.10 to claim 27th place. The Welshman was the third British counter to earn the men’s team fourth overall, their best finish in 23 years and just 42 seconds off the bronze medal.

Griffiths said: “I really happy to get a PB, the home crowd were brilliant today and it felt special to be running at a Championship at home.

“I was just working as hard as I could into the wind and rain but I put my head down and hoped for the best. We have finished highly up in the team standings which I think is a great achievement. There are a lot of good athletes here today so I’m happy with 27th personally.”

Aly Dixon (self-coached) was the first placed Briton in the elite women’s race in 27th recording a time of 1:12.57. The Sunderland Stroller was 19th at the last edition of the event in Copenhagen and had mixed emotions with her performance in a wet and windy Cardiff.

Dixon said: “The first 5km was spot on, I was going along feeling comfortable on the pace I felt I was capable of. I had a drink at 5km and lost 10 yards and then I was running by myself and couldn’t get them back. 10km was 30 seconds down on what I wanted it to be, but still within PB pace. It just got tougher and tougher from there.

“Training has been going really well, so I’m not going to get worked up. I’ve just got to forget about it and focus on London and turn it up there. It’s always good to have a championship on home turf – there was plenty of support out there.”

Charlotte Purdue (Nic Bideau) was the second counter for the British team in 33rd with a season’s best time of 1:13.20, which completed a strong second half to the race. After starting fairly conservatively, she made her way through the field moving from 40th to 33rd over the final 6km.

Purdue commented: “It was great to put on a British vest again, my first time since 2013 and under a new coach. I am racing in London in four weeks’ time so today the plan was just to have a strong run and feel good at the end. I feel as though I am ready to take on the full marathon now. I started off quite steady, maybe too conservatively but I felt really strong at the end, as though I could keep running.”

Tina Muir (Steve Picucci) was the third counter on her international debut, finishing 49th in 1:15.12 helping the team finish 11th overall. Rachel Felton (Christopher Frapwell) was 63rd in 1:16.36. Unfortunately Jenny Spink (Bruce Tulloh) succumbed to a calf pull at the 15km mark and was unable to complete the race.