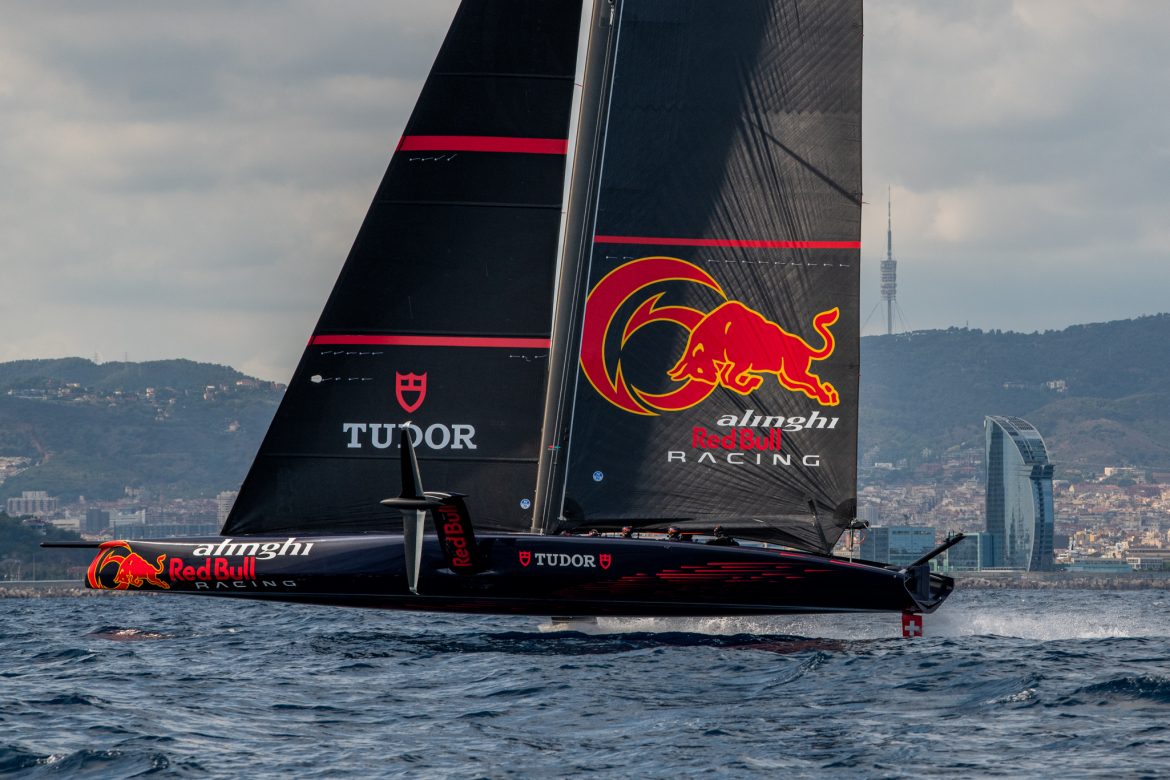 After months of preparation, and a short delay following a capsize in a storm on 31 August, the Alinghi Red Bull Racing AC75 training boat has spent the last few days sailing in Barcelona on the waters that will host the 37th America’s Cup in 2024.

Seeing BoatZero fly after months of work was an important step for the whole team and marked the starting point for the Sailing Team’s work on the water. The sailors are learning to manage and handle the AC75 with the aim of being successful by 2024. This is a key period as it allows Alinghi Red Bull Racing to train in the same conditions as those expected for the Cup races.

While the sailors are now able to fly BoatZero on its foils in a straight line, they still have a lot to learn to fully master it. This – like the supreme effort made by the Shore Team to get BoatZero sailing – will be a team effort. Getting to this point has required patience and dedication to moving forward systematically, step by step, and the emotion was palpable during the first outing – ashore, on the chase boats and onboard the AC75.

“It was a mixture of nervousness and adrenaline as we cast off,” said Arnaud Psarofaghis, a member of the Driving Group, earlier this month. “Since that first training session the team has progressed at every level.”

“We are learning to work within the dynamic of a big team,” said Pierre-Yves Jorand, co-general manager head of sports operations. “The protocol for launching and hauling out the boat at the beginning and end of each day is smoother, and we are shaping the sports operation to include the sailing.”

Although the Swiss sailors are new to the AC75, they are drawing on the experience of two Sailing Team advisors: Dean Barker, a helmsman during the last America’s Cup, and Pietro Sibello, a trimmer. Both are bringing their huge experience to bear for the Swiss challenger.

During each outing BoatZero is closely monitored by the designers, the Support Team, and the Shore Team members on board the chase boats. “It’s very interesting for the designers to see the boat fly,” said Marcelino Botin, principal designer. “Despite the data and videos collected at the end of each day, there is no substitute for what we can observe with our own eyes.”

The team will continue to sail the AC75 as much as possible in Barcelona, notching up a maximum number of hours on the water. Meanwhile, some of the sailors will fly to Scarlino in Italy this week for the final leg of the 2022 TF35 Trophy, which Alinghi Red Bull Racing has already won with one event to go.

After over a decade away from the Cup, Alinghi, one of the most dynamic names in the history of the America’s Cup, is returning to battle for sailing’s highest honour. The consecutive-winning syndicate joins forces with Red Bull, the driving force in global sport, to create a new team: Alinghi Red Bull Racing.

The team sails under the flag of the Société Nautique de Genève and is accompanied by its main partner Swiss watch brand TUDOR. The official Swiss challenger will compete in the Selection Series for the 37th America’s Cup, in 2024 in Barcelona. The countdown starts now!

Bryan Mettraux, driving group: “Since last week, we are mastering the boat better. We’re not using it to its full potential yet, but we’re sailing increasingly smoother, and with all the systems working on board. We were of course looking forward to getting out on the water, but the preparation time was necessary; these are very complicated boats. We are now starting to draw on the power of the boat, and it is an incredible feeling. I am lucky to be handling the flight control, it’s an extraordinary role, very special and powerful. I feel a lot of adrenaline, pride, but mostly gratitude to all those that have worked so hard to get us sailing. There is still a lot to do, but I realise how lucky we are to be working with such a team to count on!”

Pierre-Yves Jorand, co-general manager head of sports operations: “We are coming out of a transition period, where the boat is going from the yard to the sailors. It’s a big step! We are discovering the machine, gaining confidence, and learning to work as part of a large team. In the life of a sailor, as in a Formula 1 team, the number of hours on the circuit or on the water is minimal compared to the rest of the work. What goes on behind the scenes is enormous. The team has shown tremendous commitment since the capsize to get the boat back on the water as quickly as possible. I’ve been watching the team closely, and I see them getting stronger and more united every day. This is what will enable us to progress towards 2024. The challenge is great: the America’s Cup is the Everest of sailing, and we have not yet reached base camp.”

Marcelino Botin, principal designer: “It’s great to see the sailing team able to sail the boat efficiently after only a few days. The biggest challenge for a team that doesn’t know the boat is to be able to sail it reliably. This gives us confidence for all the learning we have to do before making crucial decisions for the design of BoatOne. With every outing, we learn an enormous amount about how to set the boat up. From the chase boats, we are in constant contact with the sailors onboard and can test the required developments in real time.”

Florian Trüb, power group: “At the moment, the power group only provides the energy to trim the headsail, but eventually, we will provide all the power needed to sail the boat. The effort will be much greater for the four members of the Power Group, and we’re training hard physically to be ready for that day supported by our fitness coach Alex Hopson and our physiotherapist Matt Tinsley. In the meantime, we have experienced the amazing feeling of the boat rising onto the foils. It’s incredible, and it feels great to be out on the water after months of preparation.”