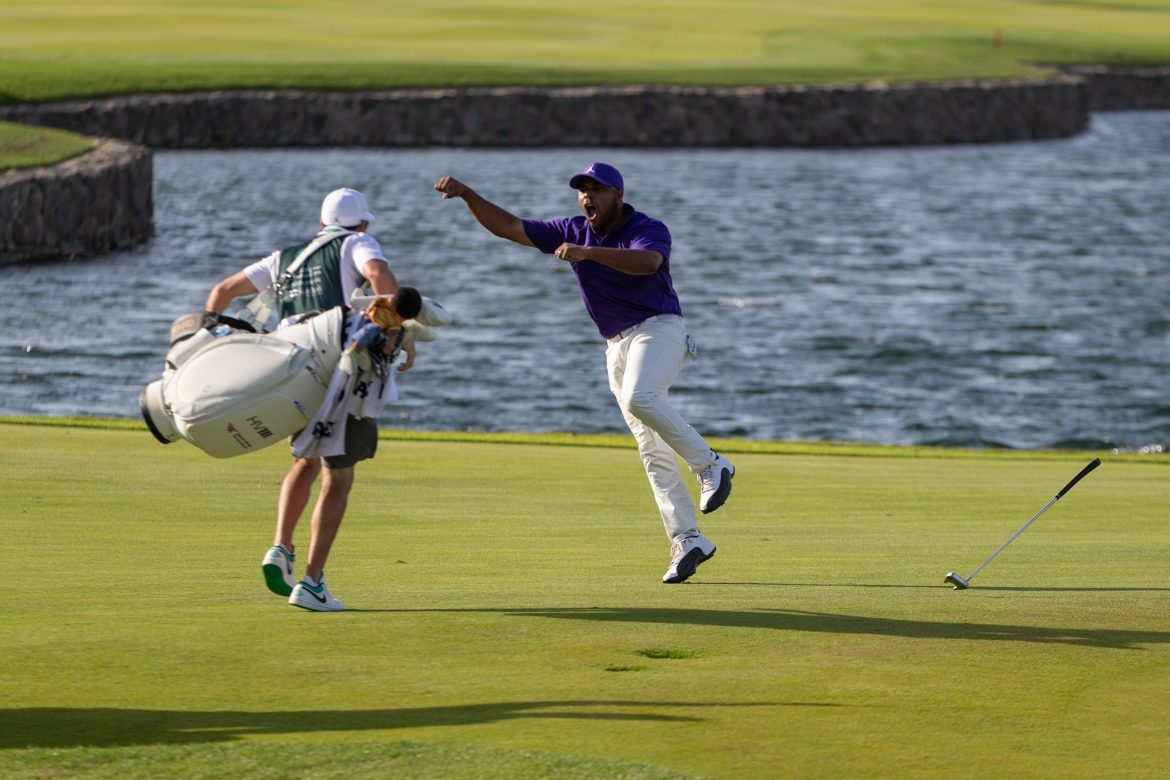 Varner III needed only a birdie four to take two-time Masters champion Watson to a play-off on the final day of the $5million tournament, being played at Royal Greens Golf & Country Club in King Abdullah Economic City.

However, his snaking effort from the fairway of the closing hole was judged to perfection, dropping into the cup to his elation, sparking scenes of wild celebration between the Ohio-native and his caddie, Chris Rice.

“I’m just trying to take it in,” said Varner III in his post-match press conference. “Winning just never gets old. I just know that there’s been times where it just didn’t go my way and today it did. I’m super thrilled not just for myself, but everyone that’s either on my team or in my corner.”

The 31-year-old headed into Sunday’s final round with a one-shot lead over Spain’s Adri Arnaus. By the time they made the turn, they were equal at the summit – with a five-under-par front-nine 30 establishing Watson as the pair’s only real contender.

Watson’s back nine proved a little more inconsistent, but a closing eagle on 18 cemented him a two-shot clubhouse lead as Varner III and Arnaus battled to bogey fours on Royal Greens’ iconic 16th hole, as the course’s infamous afternoon winds picked-up.

A well-taken birdie on 17 put the American in need of a closing birdie to take his good friend Watson to a deciding play-off. However, Varner III had other ideas.

Opting to putt from the fairway on 18, his stroke traversed the undulating green, picking-up just enough speed as it passed beyond the plateau to continue its move right-to-left and drop into the cup.

“It was awesome,” said Varner III, looking back at the momentous putt. “Obviously that it went in kind of helped!

“When I was coming down the hill, worst case scenario [was that] we’ll go to a play-off, and I’d get him there. And then it went in, and emotions came out. I love that. When I play with my boys, that’s the emotion I want to see. That’s why you play. Competition, it’s the greatest thing in the world.”

Talking through his final three holes – all played keeping an eye on Watson’s score – Varner III continued: “You just want to keep it out of the water on 16. I thought worst case scenario, I’ll get it up there and make it. I hit a great putt. So, I walk up to 17, and it’s – yeah, we’re tied!

“We have to wait until they get off the green. While we’re on the tee, I see he goes to 12. So, I’m like: ‘Damn, all right!’. So, I’m two back. I’m like, just get something up there, give myself a chance to make birdie. Eighteen, you know, obviously anything can happen.

“I just never doubted myself. I think that’s what the greats do. I would think a couple years ago I would have had a hard time taking that in and being like I have to do this. No, just play golf, do your job. That’s what I’m supposed to do.”

Watson was one of the first to congratulate Varner III, running from the scorer’s tent to the green to embrace a player he shares a strong friendship with.

“He’s a dear friend of mine,” said Watson. “It’s a guy I truly love. It’s a guy that I want to help. He’s new – when I say new, we know Harold, but it was five years until I won my first. So this is a guy that’s just starting to play better and better each year. We see his name a little bit more. He’s getting comfortable.”

Watson added: “I knew it was going to be a battle. I told myself [after the 11th hole] if I could somehow shoot one-under the rest of the way, the last seven holes would get me probably a top five. Then the wind kept going, and we played a few holes, and I was like maybe a one-under would get me a top three or something like that. I was never trying to win. It was always just a high finish.”

On coming down 18, he continued: “I knew that if I could make an eagle, I could scare him. Not knowing what he was doing or what they were doing behind me. So, I made the eagle, and I looked up and saw I had a two-shot lead. Then I thought I had a great chance, but obviously he pulled out a shot better than me to win. So it was a crazy back nine and a fun back nine.”

Spain’s Adri Arnaus shot a one-over-par 71 to finish on -10, third behind Varner III and Watson. England’s Steve Lewton and Cameron Smith of Australia finished one further back on -9, with 2019 and 2021 champion Dustin Johnson of the USA finish on -7.