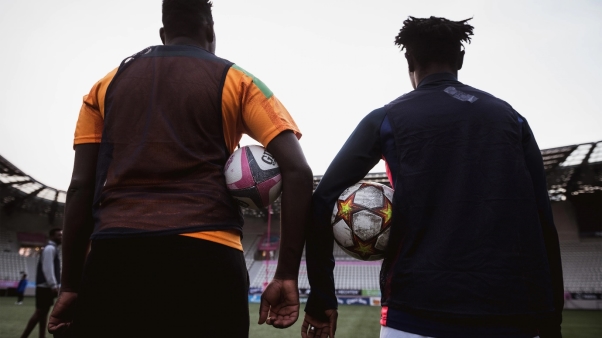 As four million people flee Ukraine and tens of millions flee other countries and territories around the world affected by conflict, disaster and persecution in search of refuge, creating access for forcibly displaced children and youth to play and practice sport has never been so important.

The International Day of Sport for Development and Peace (IDSDP) provides an opportunity to look at some of the initiatives put in place to help the populations affected by displacement around the world. Whether it is young people fleeing war in Ukraine, Syria, or elsewhere in the world, climate migrants from Bangladesh, or those who are looking for a place to belong, sport can provide relief, support integration and social cohesion and foster hope.

From Ukraine to France: the journey of Yasser

Yasser Canire, a Moroccan student formerly at Zaporizhzhia University in Ukraine, is evidence of how sport can be a tool for overcoming trauma and finding a sense of belonging. Yasser fled the country in February when the Russian army invaded Ukraine, hoping to reunite with members of his family in France. He faced a long journey through Europe, travelling by train from Ukraine to Slovakia, then through Austria and Germany, before eventually arriving in Paris. Amid the chaos of the packed train journeys, Yasser lost his only possessions in his small suitcase, but eventually found his uncle after reaching the French capital. Since settling, Yasser’s passion for taekwondo has helped him feel a sense of belonging with his new community, after he came across the “Terrains d’Avenir” programme.

Launched on 1 March, this three-year Sport for Protection programme co-created by the Olympic Refuge Foundation (ORF) and the French Ministry of Sport aims to allow young people affected by displacement to develop a sense of belonging and define a new positive “life project” in their host communities through sport. In addition to the regular and diversified sports practice for its participants, “Terrains d’Avenir” organises events to create social links between the young, displaced people and local communities, as well as offering training and support activities with the objective of creating vocations for sports professions and promoting professional integration. Yasser is currently practising taekwondo through “Terrains d’Avenir” four times per week and has started to integrate with the local community through the programme.

“I love taekwondo. Being able to practise my favourite sport since I arrived in France thanks to Terrains d’Avenir has made me feel so much more comfortable and happy,” said Yasser.

Since its creation in 2017, the Olympic Refuge Foundation (ORF) has been striving to develop programmes and networks  to connect and create opportunities for young people affected by displacement and improve their well-being 365 days a year.

These projects have brought hope and healing to vulnerable populations around the world. Sport has also proven to be a catalyst for empowering displaced communities, and there is growing evidence showing its role in supporting the mental health and psychosocial support in displaced contexts.

To date, the ORF has supported 12 programmes across ten countries, benefiting tens of thousands of young people since its creation, including through “Terrains d’Avenir”.

The Foundation is aiming for one million young people affected by displacement to have access to safe sport by 2024. This ambitious goal cannot be reached alone, and the Olympic Refuge Foundation, together with UNHCR and the SCORT Foundation, brings together more than 80 partners from governments to National Olympic Committees, International Sports Federations, clubs, associations and civil society organisations in the Sport for Refugee Coalition launched by the IOC, ORF and UNCHR at the first Global Refugee Forum in 2019. All the entities came together in 2019, pledging to use sport to increase access for and improve the lives of refugees.

Developing a support network for refugees and displaced people in Jordan

Jordan has provided a safe haven for hundreds of thousands of refugees fleeing the Syrian civil war since the crisis first started 11 years ago. The arrival of refugees has put pressure on local services and authorities, and led to increased tensions and potential for conflict between refugees and host communities.

In 2018, the ORF launched the Sport for Peace, Life Skills and Social Cohesion programme in partnership with Jordanian international NGO Generations for Peace (GFP), which has brought together young refugees and their Jordanian peers, increasing feelings of belonging and community among those who took part.

GFP has increased equal access to sport-based activities for Syrian refugees and vulnerable Jordanian youngsters in 108 schools and 76 youth centres nationwide through weekend activities, summer camps and other sport-based content, which offer life skills and social cohesion for young people.

During the three-year period that the programme ran (November 2018 – November 2021), almost 14,000 young people (of whom 63 per cent were girls) accessed safe sport through both in-person and online activities. Additionally, GFP provided specialist training to 144 schoolteachers and 102 youth workers in the country.

In addition to wars, climate change is also forcing an increasing number of people to leave their homes. In Bangladesh, as the country suffers heavily from the effects of frequent droughts, tropical cyclones and floods, there are many who are forced to emigrate from the north of the country to the south. These climate migrants often live in precarious conditions and are at risk of abuse and exploitation in their new environment.

To support these internally displaced populations – it is estimated that by 2050, climate change will cause one in every seven people in Bangladesh to suffer displacement – the ORF launched a programme named “Sport for Protection, Resilience, and Transformation” (SPIRIT) in February 2022, together with Terre des Hommes and Bangladesh NGOs Solidarity and Breaking the Silence.

SPIRIT’s objectives are to enhance the physical, mental and psychosocial well-being of adolescent girls and young people from vulnerable communities by promoting their access to safe sport and giving them knowledge and skills which will benefit them in the long term. SPIRIT will support 10,000 participants between February 2022 and January 2025, and create a safe space in which young people can build confidence and forge strong relationships with local communities and organisations.

The programme will also train nearly 100 coaches and teachers over a three-year period, providing them with a deeper understanding of safe sport and ensuring they are equipped to ensure the safety and well-being of vulnerable young people. Regular meetings between the programme directors and those involved in national- and district-level sports will also create a legacy from which future generations can benefit.