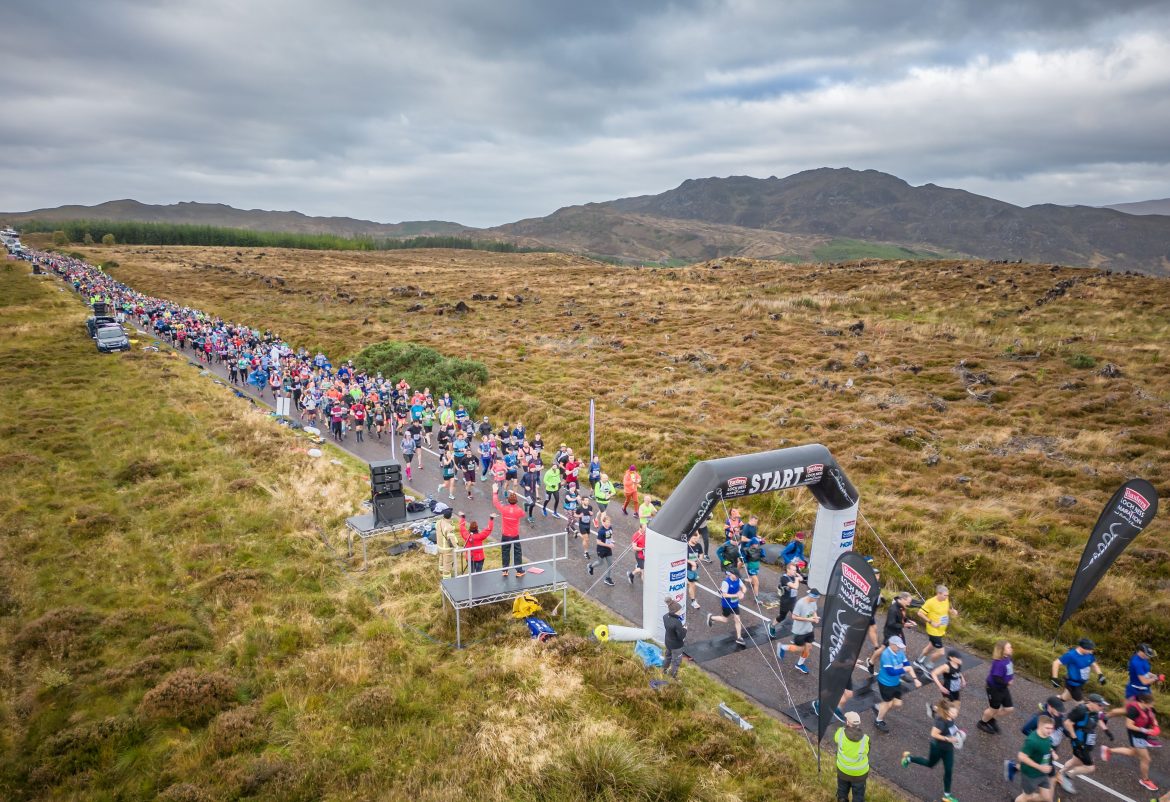 The shores of Loch Ness were filled today (Sunday, October 2) with excited runners at the Baxters Loch Ness Marathon and Festival of Running.

Dougie Selman from Corstorphine AAC triumphed in the Baxters Loch Ness Marathon, crossing the line of the bucket-list, point-to-point race in a time of 02:23:53. In what was only his second ever marathon, he beat favourite – and 2019 champion – Isaiah Kosgei into second place.

Jemima Farley was the first female finisher, with a finish time of 02:42:40. Completing the course in the second fastest female time ever, she was inspired to enter the marathon after seeing her dad enter when she was a child.

Mhairi Maclennan of Inverness Harriers clinched a new course record for the Baxters River Ness 10K, beating the previous female record by an incredible 46 seconds in a time of 00:33:00. And Lachlan Oates from Shettleston Harriers won the race overall in a time of 00:30:26.

The first male and female runners across the Baxters River Ness 5K finish line were Cameron Green of Giffnock North in 00:15:21, and Lois Macrae from Inverness Harriers in a time of 00:17:58. UHI Inverness 1 scored the title in the 10K Corporate Challenge.

Malcolm Sutherland, race director, said: “To have reached our 20th marathon feels quite incredible, and it has been amazing to see so many runners taking to the roads here in the Highlands and appreciating our beautiful corner of the world – including three who have competed in every race since we started in 2002.

“Being our anniversary year and seeing a new course record set in the 10K has made the event extra special, and we’ve been delighted to welcome so many runners from across the globe to the Highlands – 56% of marathon runners were from outside Scotland, with 13.5% from overseas.

“We’d like to offer a huge thank you to our amazing team of 500 volunteers, some of whom have been with us since our first marathon – we really couldn’t do it without them. And also to Baxters and our other sponsors and partners for their continued support.

“Early bird entries for our 2023 marathon are open now, and we’ve already seen a high level of interest from runners keen to return to the Highlands next year. After such a successful 20 years, we’re looking forward to the next 20 – and many more beyond that!”

Audrey Baxter, executive chairman and group CEO of title sponsor Baxters, commented: “Congratulations to everyone who took part in the 20th edition of the Baxters Loch Ness Marathon and Festival of Running. Every year the event offers a unique and memorable experience for all the runners as well as bringing a real buzz along the banks of beautiful Loch Ness and the town of Inverness.

“Baxters’ ethos is to ‘be different, be better’ and one of the reasons we have supported the event since day one is because those taking part have the chance to demonstrate these qualities in their endeavours and achievements; whether they are striving for a personal goal or fundraising for a cause important to them. Well done to every runner who has taken part this year and to the festival team for delivering another hugely successful event.”

Paul Bush OBE, VisitScotland director of events, added: “I was delighted that EventScotland supported the 2022 edition of the Baxters Loch Ness Marathon through the International Events Funding Programme, helping them deliver another outstanding event, and would like to congratulate all of the runners, especially Dougie Selman and Jemima Farley. The banks of Loch Ness truly provide the perfect stage for a world-class marathon and it was wonderful to see the event so well attended and enjoyed.”

The event also provided an ideal opportunity for charity supporters to fundraise for the causes closest to their hearts. Hundreds of runners donned their running shoes in support of the event’s 40 charity partners, with tens of thousands of pounds expected to be raised.

Sophie Hodgson, challenge events programme manager at lead charity Macmillan Cancer Support, said: “We had an incredible time at the Baxters Loch Ness Marathon. We had a fantastic team of 170 runners who together raised over £60,000. We want you to know that your support really does make a difference to those affected by cancer.

“If you didn’t manage to sign up to the 2022 Baxters Loch Ness Marathon, we would love you to join Team Macmillan in 2023!”

The Baxters Loch Ness Marathon & Festival of Running is one of the world’s most popular running events, and takes place in 2023 on October 1. Early bird entry for all races is open now – sign up at www.lochnessmarathon.com.

The point-to-point marathon starts in atmospheric Highland moorlands, stretching 26.2 miles along the south-eastern shores of the iconic Loch Ness and finishing in the Highland capital, Inverness. The Festival of Running also comprises the River Ness 10K and 10K Corporate Challenge; River Ness 5K; and the Wee Nessie for under-5s. 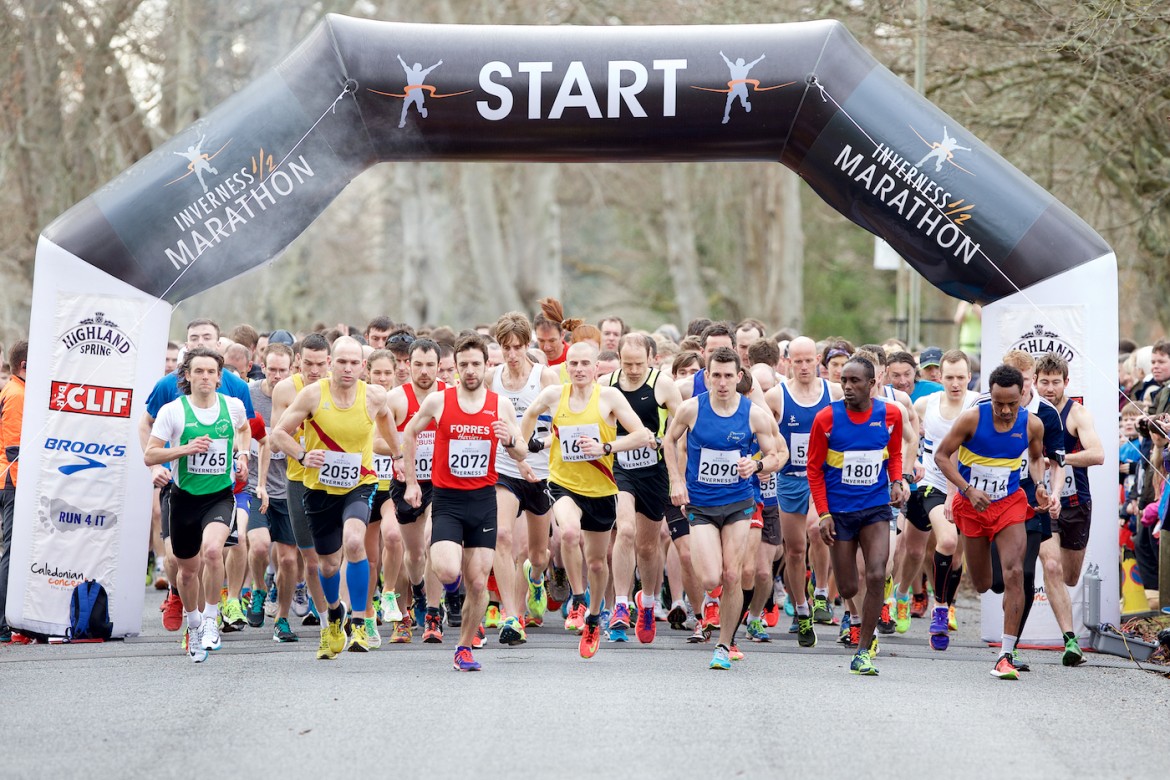 Excitement is building in the Scottish Highlands as one of the world’s most popular running events returns for its 20th edition this weekend.

The Baxters Loch Ness Marathon and Festival of Running will celebrate its emerald anniversary on Sunday, October 2, 2022 – attracting 7,150 runners from 43 countries across the globe.

Race director Malcolm Sutherland said: “The week leading up to the marathon is always exciting – but this year is especially so, with it being our 20th Baxters Loch Ness Marathon.

“As runners begin to arrive in Inverness – travelling from across the UK and overseas – there will be a real buzz in the air, leading up to race day on Sunday. This year, 56% of marathon runners are from outside Scotland – with 13.5% travelling from overseas. There’s always a great atmosphere on the shores of the loch and in the city, so we’re sure this year will be a huge success.

“We’re indebted to our title sponsor Baxters Food Group, who have been with us since day one. Having the support of such a well-known brand from the very start has been so important to us in cementing the marathon’s success and reputation around the world. We hope our partnership will continue for many more years to come.”

Known for its natural beauty, the marathon is a challenging, enjoyable run on closed roads through some of the world’s most stunning scenery – a true dream come true for all runners. Regularly appearing on many lists of the best courses in the world, the Baxters Loch Ness Marathon is considered by many to be a ‘bucket list’ destination.

Audrey Baxter, executive chairman and group CEO of Baxters, commented: “We are incredibly proud to have supported the Loch Ness Marathon and Festival of Running since its inception. It is a fantastic event, growing in size and stature over the years to become a key event in the runners’ calendar and showcasing this beautiful part of the world in all its glory.

“It has been a real partnership over the years, with the event providing the perfect platform to demonstrate our ethos to ‘be different, be better’ through our commitment to local community, charity and health & wellbeing.

“Good luck to all the runners, including those from the Baxters team, who are gearing up to take part on Sunday!”

Sophie Hodgson, challenge events programme manager at official charity Macmillan Cancer Support, added: “Macmillan does whatever it takes to support people affected by cancer, but we can’t do it without our amazing volunteers. This year we have a fantastic 170 runners taking part for Team Macmillan – we will be there to cheer them over the finish line and celebrate with them at the event village. Good luck to all the participants, and we can’t wait to see all of our runners!”

Spectators are encouraged to line the finish line at Bught Park to cheer runners over the finish line. Entries to the Baxters River Ness 5K and Wee Nessie kids’ race will also be available throughout the weekend, subject to capacity.

Over the weekend, participants and spectators can visit a free sports expo showcasing the latest running apparel and equipment from Run4It, Hoka, Garmin, Shokz, Ronhill and Big Bobble Hats; enjoy live music and kids’ activities; and visit the Runners Cafe.

BBC Scotland’s Bryan Burnett – a regular fixture at the event – will host a series of informative talks and Q&As in the Runners Cafe throughout the Saturday, featuring prominent running personalities.

Paul Bush OBE, VisitScotland director of events, said: “The world-famous Loch Ness needs no introduction and provides the perfect stage for marathon runners from across the globe. I’m delighted that EventScotland is once again supporting this fantastic event through the International Events Funding Programme and would like to take this opportunity to wish the best of luck to all those taking part whether for competition, fun or charity.”

The Baxters Loch Ness Marathon & Festival of Running is one of the world’s most popular running events, and takes place in 2022 on October 2. The point-to-point marathon starts in atmospheric Highland moorlands, stretching 26.2 miles along the south-eastern shores of the iconic Loch Ness and finishing in the Highland capital, Inverness. The Festival of Running also comprises the River Ness 10K and 10K Corporate Challenge; River Ness 5K; and the Wee Nessie for under-5s.

Temporary traffic restrictions will be in place in Inverness and south Loch Ness.

In a race stacked with international stars it was always likely racing would be intense and fast and so it proved to be the case as the visitors dominated the 102km race at the Tarawera Ultramarathon event in Rotorua today in close to perfect trail running conditions.

The women’s race saw debutant Manuela Soccol (Belgium) stun the field with a brilliant victory, one that left the former Olympic Games marathoner in tears at the finish. Soccol proved too strong for another debutant over the distance in Anne-Marie Madden (USA) and Naomi Brand (South Africa).

The Brit runner Tom Evans was in control throughout and paced himself brilliantly through to the line in 8:03:26, only just missing the magic eight-hour mark. Evans was over half an hour in front of Mathieu Blanchard (Canada), with Kris Brown (USA) less than a minute further back in third.

Over 4000 participants including international athletes will compete. As usual, the main race of the event will be the 128 km Classic, which will repeat the route from Las Palmas de Gran Canaria to the south of the island, with the big change in the location of the finish line, which will be at The Lighthouse of Maspalomas.