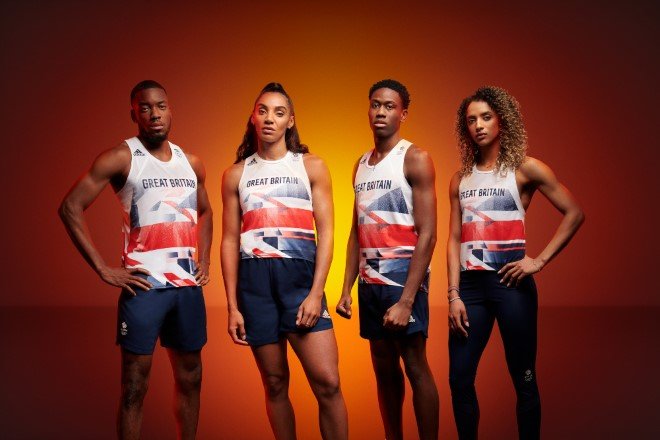 Today, adidas revealed the new kit that will be worn by Team GB athletes at the Games taking place in Tokyo this summer.

Following a year of uncertainty, unprecedented challenges and unique circumstances, Team GB and ParalympicsGB athletes will rise together in a kit that represents unity in diversity. The kit design features a contemporary representation of the Union flag, incorporated with inspiration from the host city, featuring intricate Japanese iconography.

One of the key features of the new kit is the deconstructed Union flag. The village wear designs also feature lion graphics alongside the national flowers of England, Wales, Scotland, and Northern Ireland, and incorporate transparent overlays to bring a rich depth of uniqueness and modern relevancy to celebrating national pride.

The collection includes competition wear for a breadth of sports such as track and field and gymnastics, as well as debut Olympic sports like skateboarding and sport climbing, alongside podium and village wear. To help athletes keep cool during what is set to be the hottest Games on record, the kit features HEAT.RDY technology, which is constructed using cooling material and textures that are optimised for use in hot environments.

Complementing the collection is the latest innovation in footwear, adidas 4DFWD. The silhouette has been crafted using years of athlete data, cutting-edge technologies in 3D printing, and Carbon’s Digital Light Synthesis™ providing athletes with precision performance in every step.

Hero items from the collection include:

Crafted with sustainability in mind, each piece in the collection integrates sustainable innovation for the first time in kit history. Leading adidas technologies including PRIMEGREEN: a series of high-performance recycled materials that use a minimum of 40% recycled content and PRIMEBLUE: a high-performance recycled yarn containing at least 50% Parley Ocean Plastic will feature throughout the apparel.

Andy Anson, British Olympic Association CEO said: “Despite the incredibly difficult times society has faced this year, everyone associated with Team GB has remained positive and focused, especially the athletes who have worked incredibly hard to keep their dream of going to the Tokyo Olympic Games alive.

“Today’s launch of the adidas Team GB kit is another important step on that journey, bringing the athletes closer to realising their ambition. It’s always such an exciting moment when we see the kit for the first time and with the innovation and creative design of adidas we have no doubt that the athletes will look and feel ready to perform in Tokyo.”

Melina Hartmann, Design Director, adidas said: “It is so exciting to be unveiling the new kit for the Team GB and ParalympicsGB athletes. Through experimentation and dedication, each piece in the collection highlights how far we have pushed the boundaries in contemporary design, innovation, and sustainability. We hope all athletes feel like they can make their mark as individuals and as a team when wearing the kit at the Games this summer.”

Chris Walsh, VP Brand, adidas North Europe said: “At adidas, we pride ourselves on crafting product with creativity and innovation at its heart, and we have brought those values to life in the new Team GB and ParalympicsGB kits. Fusing performance with iconic style, the new kit will not only support our athletes as they rise to the challenge in Tokyo but will also provide a sense of unity for the many fans who will be watching back at home.”

To see the Team GB Tokyo 2020 adidas kit in more detail, please got to: https://shop.teamgb.com/pages/teamgb-adidas-tokyo-2020

Everyone at the British Olympic Association (BOA) recognises the unprecedented times we are currently facing. Our primary concern is for those in our society dealing with the impact of COVID-19, specifically anyone affected directly by the virus, and the countless individuals and organisations that are working tirelessly to protect our communities.

For many athletes, in common with their contemporaries across the world, preparation and/or qualification journeys are now being affected. Whilst we acknowledge the IOC are doing their best to ensure that the qualification process remains fair for all athletes across all sports, we are in regular dialogue with them on this matter, as it is clear there are significant challenges developing in training and qualification programmes that will have a major impact between now and the Games.

It is imperative to preserve competitive integrity for athletes, but it is clearly only wise for athletes to continue to prepare for the Games where it is safe and appropriate to do so, within relevant Government and public health guidelines.

As of the date of this statement (19.03.20), the IOC and the local Tokyo Organising Committee of the Olympic Games (TOCOG), have confirmed there is no change to the status of the Games happening between 24 July – 9 August 2020. The BOA will support the ongoing decision-making process and input wherever necessary.

However, we can be categorically clear that we will not endanger the health and wellbeing of the athletes or wider delegation at any point.

We will remain in regular contact with TOCOG, the IOC and British Embassy in Tokyo, as well as our National Governing Bodies, agencies and athletes’ commission and will continue to follow Government, World Health Organisation and Public Health England guidelines in monitoring any ongoing change of advice over the course of the next four months.

Today, on the anniversary of the 2011 Japan earthquake (11 March), Team GB and the British Red Cross have announced a partnership to inspire the British public to come together and make a positive difference this Olympic year, supporting people in crisis in the UK and overseas.

As Team GB prepares to take its most diverse team ever to the Olympic Games, it is teaming up with the British Red Cross and its network of 20,000 volunteers to inspire the public to perform acts of kindness. Motivated by the extraordinary achievements of the athletes in Tokyo, there will be a number of ways for the public to get involved throughout the year.

The launch of the partnership coincides with the anniversary of the 2011 Japan earthquake, which the Red Cross mobilised in response to. The 9.0 magnitude earthquake shook the north-east coast of the country, resulting in a tsunami that left more than 19,000 people dead.  The earthquake and tsunami also triggered the world’s worst nuclear disaster since Chernobyl, at the Fukushima Daiichi nuclear plant, which in addition to the earthquake and tsunami, left approximately 470,000 people displaced.

Olympic Games organisers are sending a clear message of recovery for the Games in Japan, which has inspired the partnership between the British Red Cross and Team GB who aim to promote the power of connected communities to prepare for and recover from crises.

Poignantly, the Olympic torch will start its journey in Japan from the affected region of Fukushima, where Team GB athletes Katarina Johnson-Thompson, Andrew Pozzi and Adam Gemili recently visited to view the work of the Red Cross.

During a recent visit to Japan to see the work of the Red Cross, current heptathlon world champion and Team GB athlete Johnson-Thompson said: “When I stood at the former evacuation zone in Fukushima and looked out to see huge areas that are still no-go zones because of the radioactive contamination following the tsunami and nuclear disaster, it really showed the vast scale of the disaster and how much it took its toll on Japan and what many of the people have been through.

“Some of the people who were directly affected spoke with me and shared some stories. Many of them were children who told me how they had lost their homes, everything they owned, their normal way of life – it was heart-breaking. But to see how the community has come together with the help of the Red Cross shows the power of the human spirit. It really is amazing.

“They said the Red Cross was at the scene as soon as the disaster struck and are still there now, helping people to rebuild their lives so many years later and making a real difference. It was an honour to visit such inspirational children who have such a passion for life and see what a difference the Red Cross makes.”

The announcement also comes ahead of representatives of Team GB – including CEO Andy Anson – visiting Motomiya City, in the Fukushima prefecture, on their latest journey to Tokyo next week. Since 2017 Team GB has supported Motomiya City, including developing a school exchange programme for local pupils affected by the 2011 disaster.

David Bernstein, Chairman of the British Red Cross said: “The Olympic Games are such a unifying event which have the ability to transcend sport and inspire people to come together.

“The British Red Cross have been supporting people in crisis for over 150 years, no matter who or where they are.

“We believe that connected communities are stronger and more resilient to emergencies. We want our partnership with Team GB to encourage the Olympic spirit in all of us, to get involved and share the power of kindness across the country.”

Sir Hugh Robertson, Chairman of the British Olympic Association, said: “We are delighted to announce the partnership with the British Red Cross ahead of Tokyo 2020 and in their 150th anniversary year.

“Nine years ago, Japan suffered a disastrous earthquake and resulting tsunami. Since then, and throughout Team GB’s journey to the Tokyo Games, we have sought to show solidarity with Japan and support our friends and colleagues at the Japanese Olympic Committee and Tokyo Organising Committee as the country continues to rebuild.

“Today’s announcement is recognition of the work the Red Cross did to support a devastated population and is the latest in a number of initiatives to show Team GB’s support for our hosts this summer.”