Three days of competition at the Müller British Championships came to an eventful close as more national titles – and places on the team bound for the Tokyo Olympics – were decided in Manchester.

The men’s and women’s 800m contests were hotly anticipated and both produced breath-taking races which underlined the depth of British middle-distance talent.

Müller performance of the day went to 19-year-old Keely Hodgkinson (club: Leigh, coach: Trevor Painter), who continues to impress, and the European Indoor champion produced another highly accomplished performance to come through and hit the line in 1:59.61 as she beat the 2:00.12 of Jemma Reekie (Kilbarchan, Andy Young), with Laura Muir (Dundee Hawkhill, Andy Young) third in 2:00.24.

The field had hit the bell in 61.77 before European 1500m champion Muir made a move and was followed by training partner Reekie. It had looked like that battle would decide the two automatic Tokyo places but Hodgkinson’s fantastic finish – the closing lap was covered in 57.85 – saw her breakthrough to confirm her Olympic place.

“Every athlete’s aim is to make the final and mine will be the same going into Tokyo,” said a delighted Hodgkinson. “But it will be a challenge with the calibre of the athletes.”

She will definitely be joined in Japan by Reekie, who was part of the London 2012 torch relay.

“Carrying the torch years ago was when my Olympic journey began,” she said. “I didn’t know it would come this soon but I am so excited and I want to go to Tokyo to compete. The British girls should be out there looking to medal as we were all very strong and in with a chance. We all push one another, and we all deserve to be there.”

The men’s contest was similarly thrilling as just 0.03 of a second separated the top three in another top-quality contest.

Elliot Giles (Birchfield, Jon Bigg) took victory and his Tokyo spot by clocking 1:45.11, with Oliver Dustin (Border, Graeme Mason) speeding his way to second in 1:45.12 ahead of the 1:45.14 run by Daniel Rowden (Woodford Green).

“It was such a tactical affair out there,” said Giles. “I waited for the last 100m and put down the metal then and I had to dip at the line.

“I was anxious coming into the race as I have come back from a quad injury so I knew I wasn’t the fittest and I needed this to be tactical so I could win. In three to four weeks I will be really ready to race and I am very confident that I can deliver.”

The 20-year-old Dustin will be relishing his first Olympic assignment.

“What a fantastic race that was,” he said. “I really enjoyed it. There was a lot of bumping and barging but I felt controlled and executed the race 99.9% of the way but we were all falling apart in that last 10 metres. Elliot just pipped me to the line.

“It has given me a massive confidence boost and it’s what I came here to do so I am really pleased. The rest of the world need to be fearful of what the guys are bringing from GB.”

The 200m races brought the weekend to a close and Jodie Williams (Herts Phoenix, Ryan Freckleton) completed a superb sprint double as she added another gold to her 400m success of day two.

A stadium record of 23.02 into an unhelpful -2.9 headwind saw off Beth Dobbin (Edinburgh, Leon Baptiste), who also made sure of Olympic qualification in 23.07. Desiree Henry (Enfield & Haringey, Mike McFarlane) completed the medal-winning line-up with a season’s best 23.18.

He clocked 20.63 (-1.7) on his way to victory as 4x100m relay team-mate Nethaneel Mitchell-Blake (Newham and Essex Beagles) crossed the line in 20.77 ahead of a run of 20.79 from 21-year-old Jona Efoloko (Sale Harriers Manchester, Clarence Callender).

Rio finalist Tiffany Porter (Woodford Green, Jeff Porter) is also on her way back to the Olympics after a stadium record-breaking run of 12.78 (-1.0) brought success in the women’s 100m hurdles. Alicia Barrett (Trafford, Benke Blomkvist) was second in 13.18 with a season’s best 13.18 with Porter’s sister, Cindy Sember (Woodford Green), third in 13.20.

The men’s 400m hurdles title went to Alastair Chalmers (Guernsey, Matt Elias) after his run of 49.98 saw him edge out the 50.33 of Alex Knibbs (Amber Valley, Nick Dakin). Jacob Paul (Windsor Slough Eton and Hounslow, Marina Armstrong) was third with 51.30

A late injection of pace, with a closing lap of 61.7, gave her the win over 3000m European Indoor champion Amy Eloise Markovc (Wakefield, Chris Fox), who was agonisingly just over half a second outside of the Olympic qualifying time in 15:10.54, with Verity Ockenden (Swansea, Tony Houchin) third in 15:12.24.

In the men’s 3000m steeplechase, Mark Pearce (Shaftesbury Barnet, Luke Gunn) landed his first British title but also finished just outside of the qualifying standard – 8:22 – as he won in a stadium record of 8:24.83.

Second-placed Zak Seddon (Bracknell) assured himself of a Tokyo place, however, after making sure of a top-two finish with a season’s best 8:25.08. Phil Norman (Woodford Green, Tomaz Plibersek) completed the top three in 8:31.87.

The first gold medal of the day was awarded in the men’s hammer as Taylor Campbell (John Pearson, Windsor, Slough, Eton & Hounslow) produced a stadium record throw of 75.10m in the final round to take victory and secure his Tokyo spot.

It was a third successive title for Britain’s first ever World Championships finalist in her event, who was followed by Amelia Strickler (Thames Valley, Zane Duquemin) in 17.16m and the 16.20m thrown by Adele Nicoll (Birchfield, Ryan Spencer-Jones).

F20 world champion Sabrina Fortune (Deeside, Ian Robinson) was just five centimetres shy of the European record as she threw over 14 metres for the first time in her career. The 14.05m mark saw her finish ninth overall.

Defending champion Harry Coppell (Wigan and District, Scott Simpson) attempted to break the British record of 5.85m he set at these championships on his way to victory last year but he had a pretty good consolation prize of another national title and an Olympic place. With the title won after his third-time clearance of 5.70m, he set the bar at 5.86m but couldn’t repeat the record-breaking form of Holly Bradshaw from the previous day.

Adam Hague (Sheffield, Trevor Fox) was second after a 5.15m clearance, with Lazarus Benjamin (Sale) third on countback with 5.00m.

An excellent women’s long jump competition was won by defending champion Jazmin Sawyers (City of Stoke, Lance Brauman), who had taken control of the event with a fifth-round leap of 6.73m before stretching her lead further after reaching 6.75m with her final jump.

As with last year, Abigail Irozuru (Sale, Aston Moore) took silver with a season’s best of 6.69m in the fifth round. The top two made sure of their Olympic spots. Lorraine Ugen (Thames Valley, Dwight Phillips) took bronze with 6.60m.

There was a dominant performance by defending champion Morgan Lake (Windsor, Slough, Eton and Hounslow, Fuzz Caan) in the women’s high jump. First-time clearances of 1.82m and 1.86m set her on her way to Tokyo qualification, before a third-time clearance of 1.90m. She went over 1.93m without any trouble before tackling 1.96m, a mark that proved too much on the day.

Ben Williams (Stoke, Aston Moore) won for the third time at these championships, taking triple jump gold with a season’s best 16.37m (1.6) in the second round which gave him plenty of margin for error. The result saw him confirm his slot for his first Olympic Games.

There was a first win in seven years for Eden Francis (Leicester, Glenys Morton) as she threw a season’s best of 56.32m to win the women’s discus. Shadine Duquemin (Shaftesbury Barnet) was second in 54.20m and Divine Oladipo (Blackheath and Bromley, Ashley Kovacs) third with a third-round 53.21m.

There was a seventh British title and 10th championships medal for Tom Bosworth (Tonbridge, Andi Drake) as he won the 5000m men’s race walk.

The 31-year-old, who will compete in the 20km race walk for Great Britain at the Olympics, dominated from start to finish and, even though he was given a 30-second time penalty, clocked 19:25.62 to break the stadium record.

Cameron Corbishley (Medway & Maidstone, Andi Drake) was second in with a season’s best of 20:37.39, while there was a personal best for Guy Thomas as he took bronze in 21:31.16.

Stainton took further control during the first event of the day, leapt furthest in the long jump with 6.04m (-0.8), then launching a season’s best throw of 39.66m in the javelin and coming home first in the 800m with 2:12.27, another season’s best.

There were two para athletics races staged as part of the day’s programme and Hannah Cockroft (Leeds, Jenni Banks) pipped Sammi Kinghorn (Red Star, Rodger Harkins) for victory in the women’s 400m wheelchair race. The world record-holder just had enough to sneak past her Scottish opponent as she clocked 56.43 to Kinghorn’s 56.60. Melanie Woods (Red Star, Rodger Harkins) was third in 59.99.

Sophie Hahn (Charnwood, Leon Baptiste) continued her Paralympic preparations with a win in the women’s 100m mixed class event, clocking 12.77 (-2.1) ahead of the 13.35 run by Ali Smith (Guildford & Godalming, Benke Blomkvist) and the 13:47 clocked by Sophie Kamlish (Bristol and West, Robert Ellchuk). 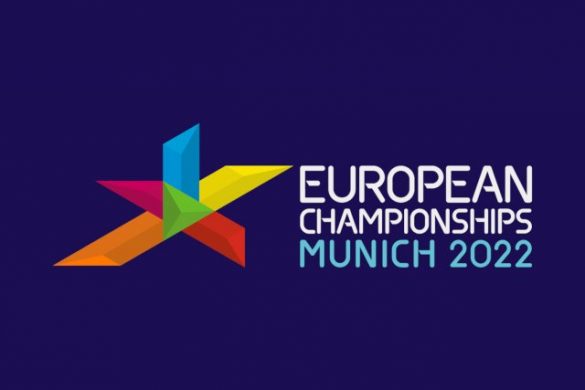