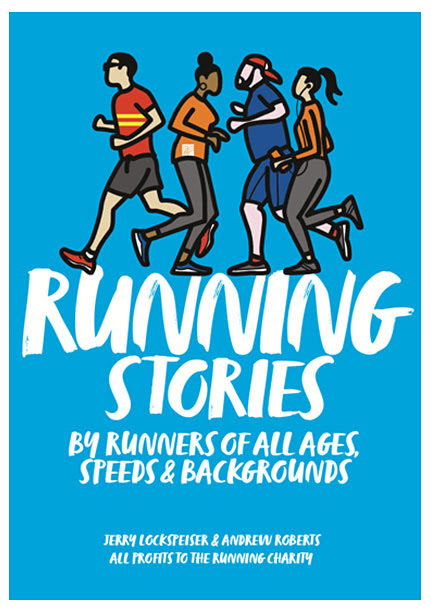 As the global pandemic sees a surge in people taking up running, this new book showcases remarkable stories from people using the sport to overcome adversity and experience positivity in their lives – including battling disease, fighting drug addiction, and coping with the aftermath of domestic violence. These are just three of over eighty fascinating and often moving stories captured in Running Stories.

It’s possibly the most revealing insight to date into why people of all ages, speeds and backgrounds run – whether it’s to meet a challenge, prove a point or simply achieve wellbeing. Each story is accompanied by a photograph of the writer.

The authors’ revenue from sales of the book is being donated to THE RUNNING CHARITY in support of their work with homeless young people.

In these 88 short stories, people of widely differing backgrounds describe why, where, and how they run. From the beginner to the elite athlete, from the parent at home to the refugee, each story is uniquely personal. But they all share one thing in common – the enormously positive effect running has on their lives. This book is filled with stories of people struggling with self-doubt who put one foot forward and never looked back. Age, shape and speed don’t matter. By taking the first step the rest follows.

Every story is accompanied by a photograph of the writer.

These stories will inspire you, make you laugh and make you cry.  They are as varied as the people who wrote them – people like Roger, Jerry, Jacquie and Camilla:

Roger Sawtell proved it is never too late to start.

“I was isolated, gaslighted, manipulated, psychologically conditioned and controlled 24/7. I wasn’t allowed access to my phone, friends, or family.”

“We have earned a Guinness World Record for the most marathons run together by a parent and child.”

If you are thinking about running but haven’t quite braved it yet, expect these stories to give you the urge to put your trainers on and head out of the door. If you are already a runner, expect echoes of your own experience and ideas for new ones.

The stories are organised into six broad themes:

* IT MAKES ME FEEL SO GOOD – Stories of wellbeing and joy.

* RUNNING JOURNEYS – Personal running histories, from getting going to achieving a goal.

* RACING TALES – From parkrun to ultra-marathon, these are all about races.

* RUNNING GOT ME THROUGH – Extra-ordinary, powerful accounts of overcoming adversity.

* IT’S ABOUT OTHER PEOPLE TOO – Making new friends, finding love, raising funds for charity, guiding a blind runner, coaching and more all show that running is far from a solitary experience.

or those thinking about running – often wonder about. It covers:

DOES IT MATTER WHAT I WEAR?

DO I NEED TO STRETCH AND WARM UP BEFORE I RUN?

HOW FAST, FAR AND OFTENSHOULD I RUN?

DO I NEED TO EAT OR DRINK?

WILL I LOSE WEIGHT?

HOW CAN I FIND OTHER PEOPLE TO RUN WITH?

AM I TOO OLD TO RUN?

WILL I FEEL PAIN?

SHOULD I SET A GOAL?

The authors are delighted to donate 100% of their revenue from sales of this book to The Running Charity who use running to improve the lives of homeless young people in the UK. This small but essential organisation saves and transforms lives – you can read about some of them in the book.

“Every runner has a different story to tell,” explains Jerry Lockspeiser. “We wanted to compile their first-hand stories, to paint a picture of the diverse nature of runners. But not just who they are as people; we wanted to showcase why they run, how it has changed their lives and how readers can identify with them to welcome new, boundless positivity into their own lives.”

Continuing, “We’ve partnered with The Running Charity, and will be donating 100% of profits to their cause. The organization is pivotal in providing personal development programmes to young people affected by homelessness, and they vitally require funds. In fact, some of our contributors came through their programmes and have incredible stories to tell – as you’ll read for yourself when you buy your copy.”

Alex Eagle, co-founder and CEO of The Running Charity, is excited about the book’s release. He says, “Homelessness can happen at any time and to anyone. When it happens to a young person it can affect them for the rest of their life. At least 103,000 young people in the UK are homeless right now and homeless young people are almost twice as likely to die as their non-homeless peers. Every purchase of this book contributes to our funds and our ability to work with more young people in need.”

Reviews have been glowing.

“This book gives you a piece of inspiration no matter the journey you are on.”

“A joyful account of running and runners of all ages.”

‘Running Stories’ is available to buy in print and eBook in the UK and internationally through Amazon, and from other book retailers on and off line.

Jerry Lockspeiser is an entrepreneur, writer, and business consultant. He took up running in his mid-50s after increasingly frequent injuries put an end to his football days. He has run 23 marathons, including the six Abbott Marathon Majors. Pleased to have set a marathon PB age 65, he remains in awe of Andrew’s superior speed and age grading. Jerry is a Director of Positive News, fellow of the RSA, and qualified RAC motorcycle instructor. This is his third book.

Andrew Roberts is a freelance graphic designer who also shoots short videos. Occasionally he dresses up as an extra on movies. Most days after sedentary work he runs around London. His race range is from one mile to half marathon, but he prefers a local 5k to big events that combine running with queuing. He holds the UK mile record for his age group in 2015. Andrew admits to enjoying running past fit looking younger folk like Jerry.

Jerry and Andrew are members of the Serpentine Running Club in London.

About The Running Charity:

The Running Charity delivers running and personal development programmes to young people aged 16-25 who are affected by homelessness. A small charity formed in 2014 in London, TRC are now also active in Manchester, Leeds, and Brighton, with plans to expand to other areas. www.therunningcharity.org