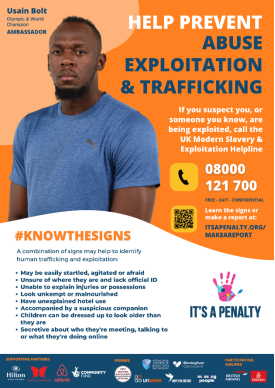 It’s a Penaltyhas completed its thirteenth global campaign for the Birmingham 2022 Commonwealth Games, focused on harnessing the power of sport to prevent abuse, exploitation and human trafficking. It’s a Penalty‘s first UK-hosted campaign is dedicated to educating sports fans and the general public, about modern slavery, what it looks like and how to access help. Through an athlete ambassador campaign video, posters and training – the public and those working around the Games, were encouraged to look out for the signs and report anyone who looks like they are being exploited.

Speaking at a recent event to discuss the issues, Geoff Thompson MBE, Deputy Chair, Birmingham 2022 Commonwealth Organising Committee Board, highlights why this campaign is so important: “We always think human trafficking and modern slavery is someone else’s responsibility. It’s every single human being’s responsibility. It’s a Penalty’s work is critical in addressing the ongoing human global trafficking and in particular, young people. Trafficking is the second1 biggest income generation in this country, to drugs. That’s why I believe this campaign is vital: if the sportsmen and women from the streets can highlight an issue of the streets at major world sporting events, such as the Birmingham 2022 Commonwealth Games, we can begin to see an international effort to break this cycle and improve lives.”

“As a matter of urgency, we need to strengthen the prevention and elimination of forced labour, modern slavery, exploitation and trafficking of persons and the protection of the most vulnerable in society, especially children, in all the countries of our Commonwealth. It’s a Penalty and its partners are proud to have spearheaded this Birmingham campaign in the run up to and during the 2022 Commonwealth Games, as one of the projects that is part of the United by Birmingham 2022 programme. Using the power of sport, everyone can play their part – from star athletes to members of the public, and from the travel and tourism and wider business sector to voluntary and faith organisations – all contributing to a positive legacy in the host city of Birmingham and beyond,” said Sarah de Carvalho, CEO, It’s a Penalty.