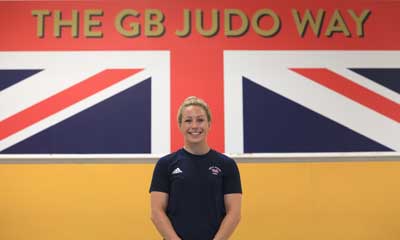 Sally Conway has today announced her immediate retirement from judo, calling time on a career that started over 26 years ago and has seen her become only one of two British female judoka to medal at the Olympic Games, World and European Championships and the Commonwealth Games.

The 34-year old will go down as one of Great Britain’s most accomplished athletes with some of the fiercest newaza skills that the world stage has ever seen.

Speaking about why she has chosen to make the decision now, Sally said: “I always said to myself ‘I will know when the times comes, and I am ready to stop’ regardless of results and performances. I wanted to know and feel when the right time to stop was.”

“I think had Tokyo 2020 gone ahead as planned last year, I 100% would have competed. The last year has given me a lot time to take a step back and reflect on the future and some may question the timing with Tokyo less than 6 months away, but in my heart I feel like now is the right time to take that step back.”

“I am so happy with what I have achieved within the sport and how my career has gone that I feel that is it for me now and I’m ready to close this chapter and see what the future holds.”

“I read my statement to my family last week and we all got quite emotional, but it was very much happy tears as we remembered all the good times and what we have been through.”

Reflecting on her impressive career, Sally recalled winning bronze at the Rio Olympic Games and World Championships in 2019 as her career highlights along with her victory at the Paris Grand Slam in 2018.

“The Worlds are special as it was my eighth World Championships. I also think my Paris Grand Slam gold was also my eighth appearance at the competition too.”

“That is something that is testament to my career, I have never given up. I always try to better myself and be the best that I can be. These results never ‘just happen’ there has been a lot of hard work behind the scenes that has gone into achieving these performances.”

“What made me so successful was having to deal with those losses earlier in my career. I have learnt so much from the low times that I was able to achieve the great performances later on and it made those successes all the sweeter knowing the journey I have been on.”

“Judo has enabled me to make some great friends from all around the world, I will miss seeing them all as there were times that I was spending more time with my judo family than my actual family!”

Looking ahead to what the future holds Sally said: “Going forward I am keeping my options open. I would like to try coaching and pass on my experience to young athletes coming through. I also plan to do sports massage, and I also enjoy public speaking. I am just going to see what opportunities arise and see what I enjoy doing, I am really looking forward to seeing what the future holds. I have learnt so much through judo and being an elite athlete that I know I have a good foundation on which to build upon in the future.”

On day 2 of the Paris Grand Slam Gemma Howell (-70kg) claimed bronze and more vital Olympic qualification points in her bid to represent Team GB at the Tokyo Games this summer.

Howell, competing in Paris for the first time since 2011, defeated the 2017 European Youth Olympic Festival bronze medallist, Lea Adam-Sendra (AND) in the opening round before defeating Ayuk-Otay Arrey-Sophina (CMR) in round 2, both victories coming by Howell’s preferred Ne-waza.

Howell left nothing on the mat in her quarter-final match against the current world number 1. Unfortunately, a single score was enough to see the French player into the semi-finals, meaning Howell was progressed to the Repechage where she faced Elisavet Teltsidou (GRE).

In the bronze medal match, both athletes were cancelling each other out throughout and, with nothing between the two, the match entered Golden Score.

As the clock neared the 3minute 30second stage of Golden Score, Timo amassed her third penalty shidos, handing victory and the bronze medal to Howell. The bronze medal match is not one that will go down in Paris Grand Slam history, but that will not matter to Howell who takes home a bronze medal and, more importantly, has gained additional, vital, world ranking points towards Tokyo qualification.

In the battle for -70kg Olympic qualification, Sally Conway was looking to continue her early season form in Paris, after topping the podium at the Tel Aviv Grand Prix in January. The 2018 Paris Grand Slam gold medallist looked great in the early rounds, defeating Demos Memneloum (CHA) and Gabriella Willems; Willems falling prey to Conway in Ne-waza.

In the quarter-final Conway faced Yoko Ono (JPN) in what turned out to be a closely contested match. With the score level at one score each the contest entered Golden Score where Ono threw Conway for ippon.

Unfortunately, Conway was unable to compete in her Repechage match against Anna Bernholm (SWE) after sustaining a slight knock to her knee. As a precaution, following medical advice, Conway was withdrawn from the competition, meaning she finished in 7th place.

Sarah Adlington (+78kg) was defeated by the 2019 European Junior Champion, Lea Fontaine (FRA) in the second round after an opening round bye.