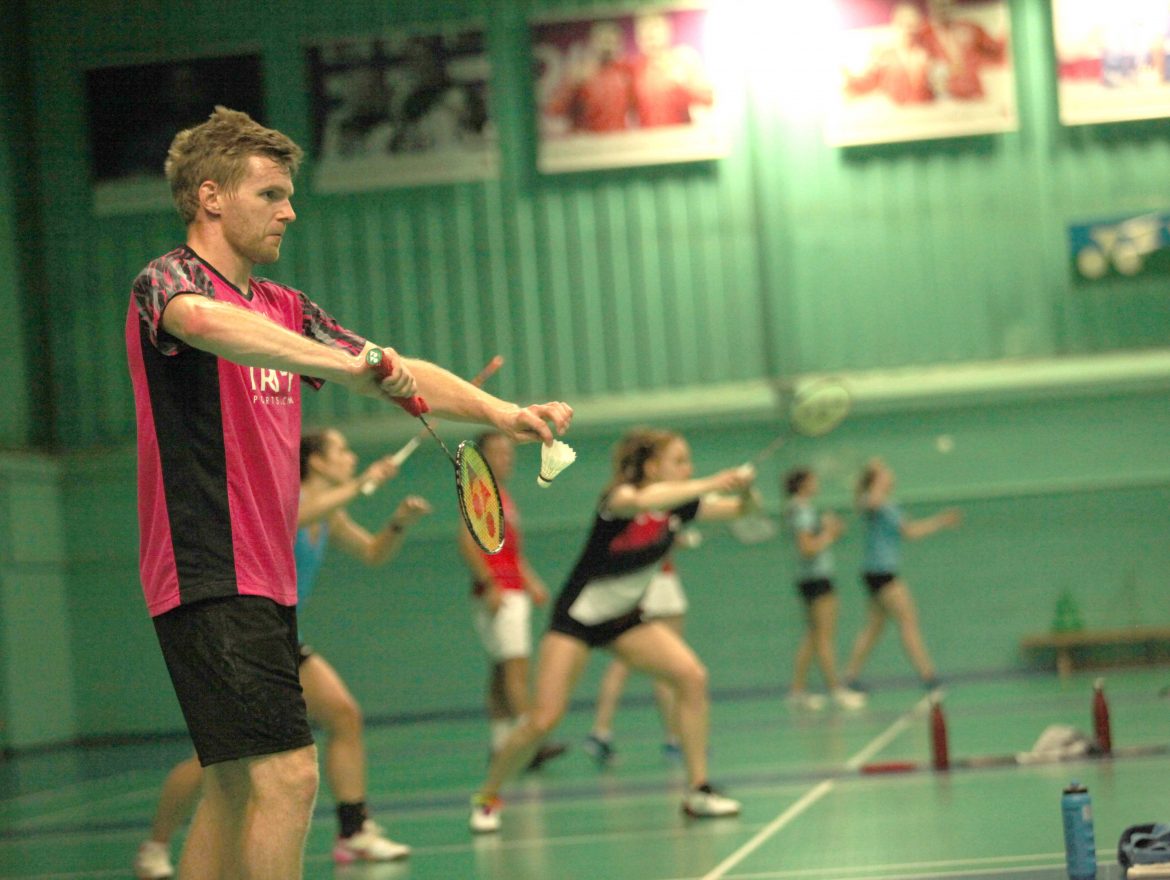 The members of the England badminton team are looking ahead to the Commonwealth Games (CWG) 2022 with hope and a belief that they can continue to improve upon their medal winning performances of past events.

TheSportfeed.com caught up with a few members of the team to seek their views on the Games and also on how the last two years has helped at the home of badminton in Milton Keynes.

Callum Hemming will form part of the mixed doubles team with Jess Pugh and will be playing at his first CWG. He will be looking to call upon the experience of fellow shuttler and team partner Jess Pugh to keep up the impressive progress the duo have made recently.

Toby Penty takes part in the men’s singles at the CWG, he reflects on team mates:

“that he will pick their brains, copy what they are doing, just so that I don’t make any mistakes of my own. I’d rather get it right first time.”

The games will take place at various venues in and around Birmingham city centre and the team are looking forward to enjoying home advantage. Especially Lauren Smith who will aim to improve upon her impressive return of 5 CWG medals to date, though this time her heart is set on the that elusive gold. All the team are eager to enjoy the atmosphere of the packed local arena.

Whilst Covid restrictions have reduced at home and around the world, the recent rise is a concern and some remain in place. The England team will be staying in the Hilton Hotel next to the NEC , ensuring outside interaction is kept at a minimum. All the badminton players will have to have two negative test results prior to joining up at the hotel. No one wants Covid to wipe out their career defining moment.

Whilst the Badminton calendar is full of events that players use to improve their points and ranking, the CWG offers a unique opportunity to mix with members of the England team and hopefully they will pick up a few tips from their preparation and performance.

Chloe Birch: “To be part of the England team and seeinghow other people operate slightly differently is a big learning curve for all of us, it is huge. I thrive off that. I really enjoy it. I love being around other athletes so I’m really looking forward to the badminton but also just the opportunity of picking up little snippets of information; this was you get the multi sport commonwealth games.”

Learning to cope in between the rounds at a tournament is always a tricky arrangement with everyone finding their own individual solution. Lauren Smith has tested herself with Wordle (in all its forms) whilst Freya Patel-Redfearn may indulge in a bit of yoga, reading and watching the Telly. This will be a welcome break from her Open University course.

Toby Penty is quite happy to indulge in added training though during his breaks/rehab he will be pondering if Marco Silva can get the best out of Mitrovic now that Fulham are once again in the top division.

One thing they don’t manage to do when they are travelling the world for competitions is to indulge in being a tourist.

Toby: “I don’t think I could reel off all the different countries and places I’ve been to over the years. A lot of the times it is the airport, hotel and sports hall. If you’re lucky enough and it’s a slightly longer trip you would get some downtime to see some of these places, this was before COVID. Really, I’m just lucky and do get to learn a little bit more about some of different cultures even though I haven’t got to explore as much as I would have liked.”

Keeping fit was the key element during the different lock downs, it wasn’t just the physical side of the activity as different niggles and strains are all issues. that can play with one’s performance. The mental aspect is a factor especially after the last couple of years. Badminton isn’t a major sport and is therefore the financial stress is a factor.

So, what are the player’s views on the mental health welfare available?

Freya: “Yeah, the mental side is so important at all types of an elite sport, definitely in this sport as well. It’s such a transition going from juniors to seniors, from training after school, to then training full time….. the toll it has on your body and your mind to keep coming back every day week in week out ….. going away for competitions. Yes, we love it, but it is tough at times. So it’s definitely helps to have that support to keep coping and finding what works for you really.”

Looking around at the interaction around the courts on the day, there seemed to be a warm, mutually supportive atmosphere around all participants, coaches, juniors included. Is that a fair observation?

Chloe: “I definitely think where we’ve come on the last 18 months. I think there’s been a lot of work behind the scenes to get it to where it is today and the fact that we can start focusing back on the badminton allows us to have a happier atmosphere. There’s been a lot of hard work gone into that by players and by staff. A lot of it has been driven by the board. I do thank them for driving a lot of that and listening to us. It might have felt a bit like, finally, they were listening, but I think they understood where we were coming from and what needed to change.”

For others the mental side is much more that just getting by from tournament to tournament:

Toby: “It’s also shown for me, the higher you get in a sport and the more elite level you play at the more it is about the mindset because everyone can hit a shuttlecock. If you ask someone to play a smash or a drop shot, they can do it really well and they can move really well. So it’s about those extra little percentages and how you approach things. For me personally, I’ve been working with a certain psychologist since December 2020. And in the run up to Tokyo especially, it was one of the biggest influences in terms of getting a good performance. It also improved myself as a person, not just a badminton player but in the way I think about life and sport. I think has helped change my perspective on things a lot.”

Whilst at the National Badminton Centre, the courts were full of people that gave a cross section view of the population, from their age groups, abilities or ethnicity. So is the CWG an opportunity to raise the profile of badminton of this family orientated sport, and try to grab the attention of the public, in turn attracting a slice of the revenue that goes the way of sports such as cricket, football, golf etc?

Chloe: “We’ve got so much to offer. There are so many people that play badminton in this country. It is so accessible as you say for so many different people. You don’t have to be in your 20’s. You don’t have to be in the 30.s. You can literally be aged from 5 to 80 and still pick up a racket and play in some form which I think is amazing. I really hope that we do inspire people to pick up a racket and just show what you can do because ….when you see it live, it’s very different. We have the All England (badminton) tournament in Birmingham every year, which is a huge event for us and it does bring in a lot of crowds and stuff so maybe it will inspire a few people that want to come watch again and again.”

Toby: “I think the only way to grow the sport is to keep growing the grass roots side of it because we need to ensure the base of the pyramid is really, really, strong which means the top must improve. So that’s really important. Players have to start somewhere. You can’t just have world class players. Everyone starts at that bottom rung of the pyramid and works their way up. The more accessible we can make then more people who are able to play; we certainly need to look in areas where necessarily badminton isn’t that big at the moment I think what we’re also finding now is the demographic widens as different cultures play.

There are a lot of a lot of Indians playing internationally and lots of players from the southern hemisphere so we need to attract British Asians. That’s where I feel as a sport we could really adapt and grow, it is the right time to embrace all communities more”.

The athletes have there own schedule depending upon what stage their career is at. For Freya it will be trying to accumulate as many ranking points as possible whilst others it will be eyeing us the next Olympics in Paris in 2024. One or two may wait until later in the year to take stock of the events to date then decide upon their future pathway.

All the Shuttlers believe that the support from the crowds in the National Exhibition Centre (NEC) will be aid their efforts.

Chloe: “Obviously, I completely understand why Covid affected attendance but I thrive on having people in the stadium and people people really getting behind you, I love the cheering.

Freya’s view? “Yeah, definitely. I think that’s something that just adds the extra atmosphere giving you meaning and motivation in all the games. I think having my family’s coming up to watch and to know that you’ve got the crowd behind you is really really exciting and hopefully it will make us performing better.”

Let’s hope all their hard work and efforts are well rewarded.

Live on The BBC