Lucy Renshall moves to the top of the World Rankings

Lucy Renshall has moved to the top of the -63kg world rankings following an array of
impressive performances over the past 12 months.

Renshall secured her first Grand Slam title in Antalya in April 2021 which helped secure her
place on Team GB for the Tokyo Olympic Games.

Following the Tokyo 2020 Games a silver medal at the Paris Grand Slam and two further
gold medals at the Baku and Abu Dhabi Grand Slam rounded off a fantastic end to the 2021
season Renshall started 2022 with a 5th place finish in Paris before retaining her Antalya Grand Slam
title in April.

“Whilst it is my name on top of the rankings, I could not have achieved any of this without a
fantastic team that support me. Without Jamie and the whole team at the British Judo
National Training Centre by my side through all the good times and the hard times I would
not be where I am today.

“I also have to thank my club coach, Peter Blood at SKK Judo Club, he was the man
responsible for getting me started in judo and I would not be where I am today without
him.”

Jamie Johnson, GB Senior Women’s Performance Coach said: “I am so happy for Lucy. This
is a great achievement for both her and British Judo. There aren’t many judoka in the world
that reach the top of the world rankings. Just seeing her name at the top of the rankings
alongside other judo greats does fill you with a sense of pride.

“Lucy has worked incredibly hard, not just over the past 12 months but through the cadet
and junior age groups, and it is fantastic to see that hard work paying off.
“Everybody from her club coach Pete Blood at SKK to all the staff at the British Judo National
Training Centre, who have supported Lucy since she joined in 2013 can be incredibly proud of
her achievement.

“This also would not have been possible without the continued support from UK Sport, The
National Lottery and Wolverhampton University who enable our judoka to access world class
staff and facilities. I am sure it will not be long until GB Judo has another judoka at the top of
the world rankings.”

Nigel Donohue, GB Judo Performance Director said: “To become World No.1 in your chosen
sport is an incredible achievement and we are extremely proud of Lucy in achieving this
milestone, in her career so far. The challenge now is to stay as World No.1 throughout the
cycle, though I have no doubt that Lucy will have great confidence in her ability to stay there
and build on her success to achieve her ultimate Judo ambitions.”

With the Paris Olympic qualification window opening later this month, Renshall will next
compete at the Budapest Grand Slam starting on 8th July.

Renshall, who recently rose to no.2 in the IJF world rankings in the -63kg category, entered Antalya as the no.1 seed. She certainly lived up to that ranking as she comfortably eased her way through the preliminary rounds defeating Prisca Awiti-Alcaraz (MEX) and Katarina Kristo (CRO) to book her place in the Quarter-Finals to face recent Paris Grand Slam champion Barbara Timo (POR). With less than 60-seconds of the contest fought, Renshall capitalised with some excellent ne-waza to pin her opponent for 20-seconds to secure an ippon score and book her place in the Semi-Finals.

In the Final, Renshall faced Szofi Ozbas (HUN), who has enjoyed great success at Junior level, being crowned Junior European and Junior World Champion in 2019.

Renshall went a waza-ari score up as the contest reached its halfway point and despite multiple Ozbas attacks late on, Renshall never looked threatened and continued to dominate the grip to secure her 4th Grand Slam title.

Lucy Renshall continued her impressive recent form to win gold at the Baku Grand Slam today whilst Kelly Petersen-Pollard continues to impress in her debut year on the IJF World Tour by winning bronze. Adding to the silver medal won by Chelsie Giles on the opening day.

Following an opening round bye, Lucy Renshall produced a great piece of progressive newaza to defeat Gabriella Moraes (BRA) to win her Pool and progress safely to the Semi-Finals where she faced Katharina Haecker (AUS).

Haecker was awarded three penalty shidos in the Semi-Final handing victory and a place in the Final to Renshall, where she faced Gankhaich Bold (MGL).

In the closing stages of the contest, Renshall trusted in her ability in newaza again to hold her opponent down for 20 seconds and claim her second Grand Slam gold medal of the year.

Kelly Petersen-Pollard was narrowly defeated in her Quarter-Final contest against Millena Silva (BRA), a waza-ari score in the closing seconds of the contest enough to see the Brazilian through to the Semi-Finals whilst Petersen-Pollard progressed to the Repechage for a change to fight in the bronze medal contest.

Petersen-Pollard registered a seoi-nage in the opening minute for waza-ari score with a second waza-ari coming in the final 40-seconds to claim the bronze medal, and her first at a Grand Slam event. 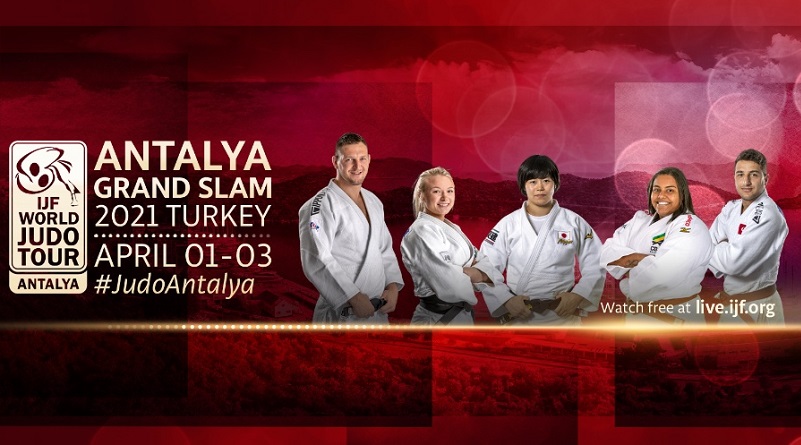