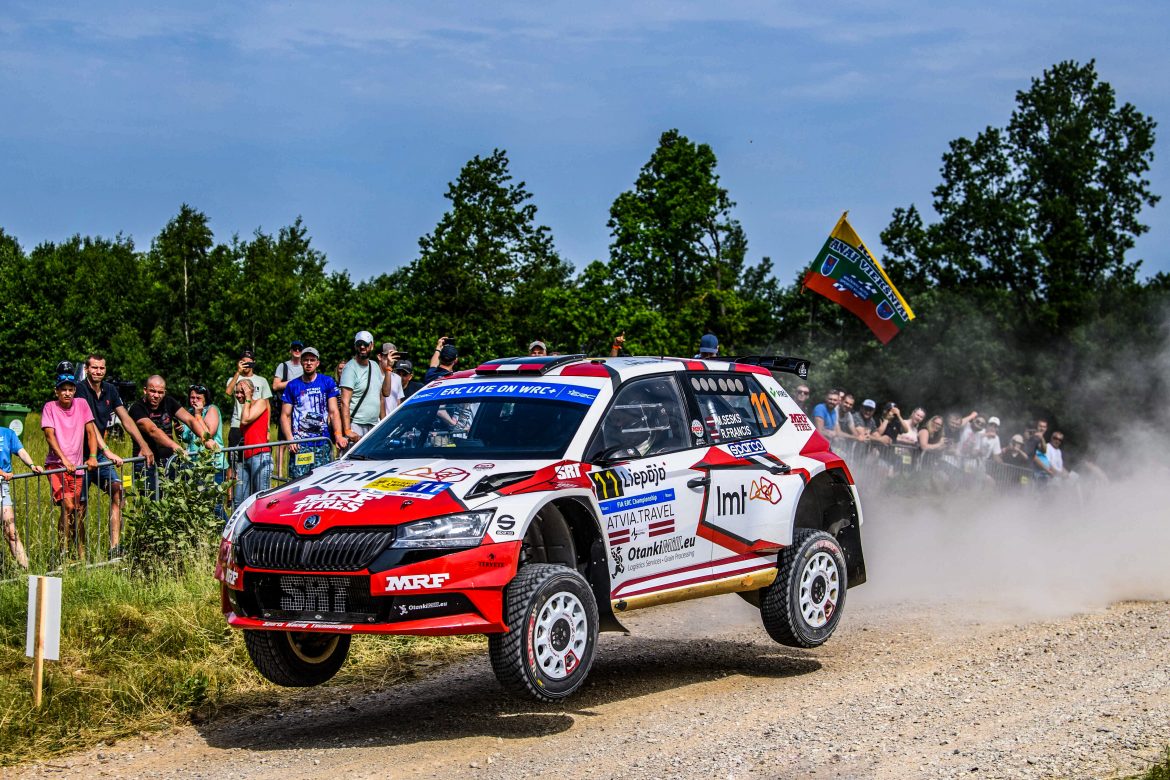 Local hero Mārtiņš Sesks claimed a clean sweep of stage wins to earn himself an enviable advantage on Saturday at Tet Rally Liepāja.

Sesks – who hails from the host city – is stepping up from ERC Open to the top-flight category for the fifth round and was simply untouchable aboard his Škoda Fabia Rally2.

The 22-year-old is, along with his Team MRF Tyres colleagues, debuting a brand-new tyre from the Indian manufacturer and wasted no time in showcasing its performance.

He delivered a faultless drive on the high-speed gravel speed tests, winning all six of the stages in the Talsi region to lead team-mate and championship leader Efrén Llarena by 22.9sec after the first day.

“I am actually a little surprised,” said Sesks. “There are lots of places I can improve – not just on being faster, but being precise and so on.

“For sure, there were some places in the second loop where you can go flat-out, but there are also places where there are some tricky ruts and some stones.

“Twenty-two seconds looks pretty good for a first day, but if you make one mistake then there is no gap at all, so now we are in the mix between being fast and pushing and also being a little bit conservative,” he added.

Llarena enjoyed an untroubled drive throughout the opening leg despite having difficulty with judging the braking points in some sections.

He remains on course to extend his championship lead over title rival Nil Solans, who tumbled from the third to 13th when his Hyundai i20 N Rally2 suffered a front puncture in the final stage.

Solans’ KOWAX Racing team-mate Tom Kristensson was 9.4sec down on Llarena and moved up to third overall off the back of his colleague’s heartache. He held a 6.1sec buffer over Fabia debutant Mikko Heikkilä, who punched in some solid times during the afternoon.

In fifth overall was Ken Torn. The Ford Fiesta Rally2 driver traded times with Heikkilä throughout the day, but lost some ground to his rival in the last stage. He ended with just 1.4sec in hand over fellow Estonian Gregor Jeets, who was driving a Škoda.

Vaidotas Žala grabbed a brace of top-three stage times but was forced to settle for seventh overall when his Fabia stalled following a spin on SS6, while Hayden Paddon languishes in eighth after his Hyundai got out of shape on a fast left-hander and temporarily slid off the road.