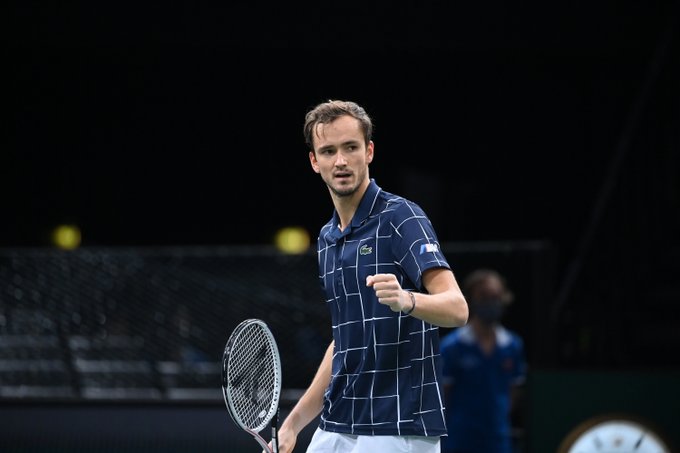 Russia’s Daniil Medvedev has clinched his first piece of silverware in 2020 after battling back from a set down to win the Paris Masters title on Sunday.

The 24-year-old produced some of his best tennis throughout his 5-7, 6-4, 6-1, win over Germany’s Alexander Zverev. A player who was on a 13-match winning streak and had beaten him in five out of their six previous meetings. Nevertheless, Medvedev prevailed in a match of fine margins with the help of 14 aces and 35 winners to clinch his first title since the 2019 Shanghai Masters 13 months ago.

“It’s great, I’m really happy. I don’t always show it after but I am always really happy to win matches,” Medvedev said during his on-court interview.
“Before this tournament I wasn’t in the best form. There had been zero finals this year and I was complaining to my wife ‘oh my god, I don’t have the level, I’m playing so bad….’
“I was playing really good during this tournament, especially today.” He added.

Locking horns on the Tour for the seventh time in their careers, there was little difference between the two top 10 players throughout the opening set. Both Zverev and Medvedev were impressive behind their first serves with each of them winning around 80%. It looked as if the proceedings were heading into a tiebreak until Medvedev faltered at the worst possible moment.

Serving at 5-6, two unforced errors from the Russian moved Zverev to a mini lead of 30-0. Gaining in momentum and increasing his intensity, the world No.7 then hit a forehand passing shot which rewarded him three set points. Failing to convert the first two, it was third time lucky for Zverev after a Medvedev forehand misfired and landed beyond the baseline. Prompting a roar of celebration from the German.

Clinching the lead, Zverev continued to face stiff opposition from his opponent who was playing all or nothing tennis which paved the way for a high quality showdown. During the third game of the second set, he successfully fended off four break points during a marathon 15-minute service game. Despite the fight, it was not enough to contain his rival.