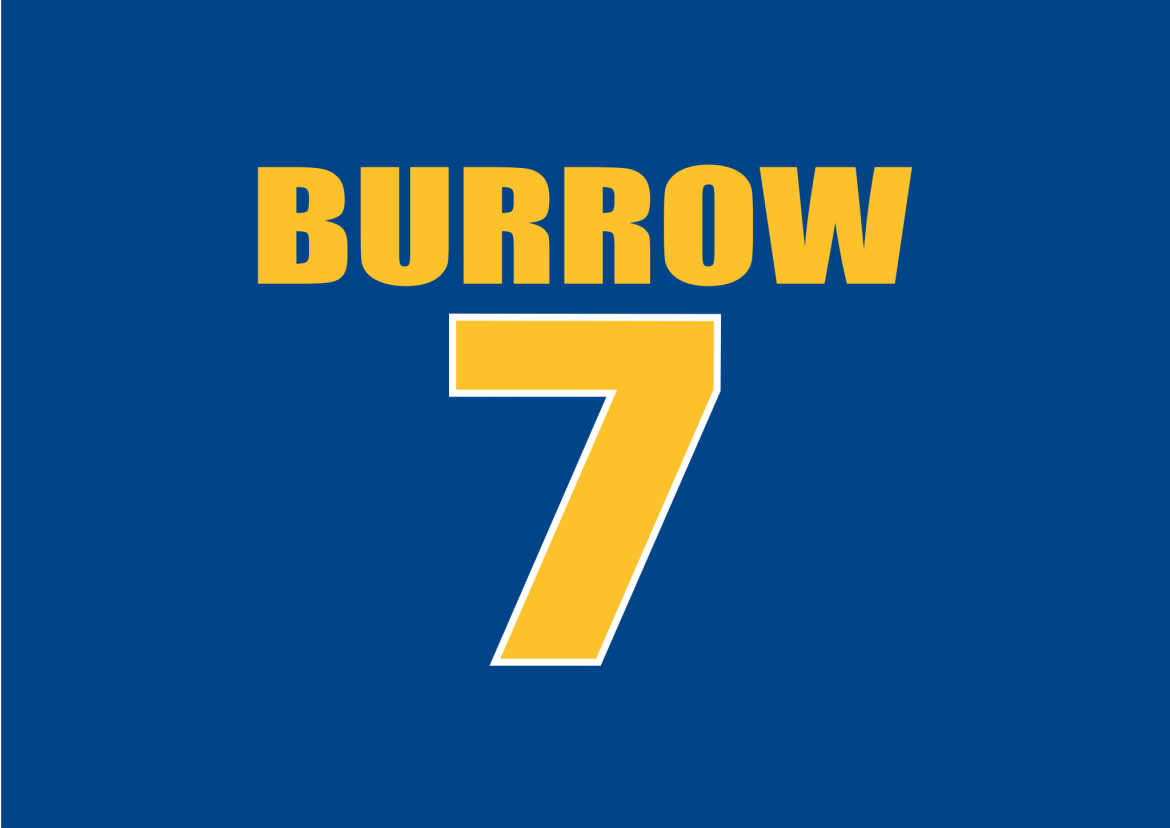 Burrow Seven is a unique fundraising campaign for Rugby League legend Rob Burrow which is set to raise money for the MND Association by inviting the public to become a member of an exclusive Burrow Seven Racing Club set up in honour of Rob.

As a member of the Burrow Seven Racing Club you’ll get to experience the drama and excitement of owning a very special thoroughbred racehorse, named in honour of Rob Burrow. The racehorse, called Burrow Seven, is a three-year-old grey gelding with a fantastic pedigree and a highly promising racing career ahead of him.

Memberships to the unique Burrow Seven Racing Club will be sold allowing the public to be part of a special journey building Rob’s legacy as a Rugby League champion and heroic charity crusader.

All profits from membership sales of the Racing Club will go to the MND Association and contribute to a number of research projects aiming to find a cure for motor neurone disease. These funds will also be recorded in The Rob Burrow Fight Back Fund.

Membership in the Burrow Seven Racing Club costs just £59. People can join the racing club at www.burrowseven.com The Burrow Seven fundraiser has been made possible thanks to the support of former rugby league player and close friend to Rob, Barrie McDermott, who is now an ambassador for the campaign.

Barrie comments: “It’s hard to come up with ideas for fundraising events in an era of COVID but we think we’ve hit upon something original, inclusive and exciting with Burrow Seven. Rob was a thoroughbred on the pitch. No one could match his speed. He was consistently a front runner for the match winning try and always a banker for man of the match!”

Rob met the racehorse for the first time on Monday2nd November at Burrow Seven’s training yard in Leyburn, North Yorkshire. Rob was accompanied by Barrie and his mother and father, Irene  and Geoff.

Rob said: “I’m a bit overwhelmed. I’ve been excited about this fundraising campaign for some time but meeting this magnificent racehorse was something else. I’m really honoured to have him named after me and I can’t wait to see him in his first race. Thank you to everyone who supports the MND Association by taking part. Research is the key to cure this disease. Together we can do it.”

Geoff Burrow commented: “Meeting this special horse meant so much to Rob. His late Grandad, Bobby Bateman, loved horses and used to spend hours reading the form books before having a flutter. If Bobby knew that Rob had a thoroughbred named after him he would be over the moon!”

Rob was diagnosed with MND in December 2019. There is currently no cure for the degenerative disease. In less than a year Rob has lost his voice and ability to walk, he has difficulty breathing and stiff joints cause him severe pain. He is 38 years old.

Rob has shown the same spirit in his battle with MND as he did on the pitch playing for Leeds Rhinos. He and his family have worked tirelessly since the diagnosis to raise awareness of the condition and to raise vital funds for the MND Association. Thanks to advances in technology, increased collaboration and funding from supporters, real progress is being made in the quest to find a cure for MND. Barrie McDermott continues: “I’ve met this horse and can testify that it has the same fighting spirit as Rob. I’m proud to be involved in the Burrow seven fundraising campaign as an ambassador and we have high aspirations for how much money and awareness we can raise for Rob and the MND Association. Plus, we hope to have a lot of fun along the way. I can’t wait!”

The original idea for the Burrow Seven fundraising campaign was the brainchild of Racing4Business founder Phil Hawthorne, who says: “The idea for this fundraising campaign was borne by my love of rugby league and passion for horseracing. Like so many of you, I have been really inspired by Rob’s battle with MND and I wanted to devise a covid-friendly way to honour Rob’s legacy on the pitch and his heroism in his battle with MND.”

Burrow Seven has initially been pre-trained by the hugely respected former racehorse trainer Henrietta Knight at West Lockinge Farm. ‘Hen’ has trained over 700 winners including Best Mate, who won three consecutive Cheltenham Gold Cups in 2002, 2003 and 2004. Burrow Seven has now moved to Leyburn, North Yorkshire to continue his training with Jedd O’Keeffe.

Burrow Seven is expected to take part in his first professional race early in the new year and then he will be aimed at Cheltenham, home of national hunt racing. Members of the Burrow Seven racing club will get to follow all of the excitement of his racing career until membership ends on October 31 2021. Throughout the year they will be given the opportunity to enter a prize draw to win tickets to watch Burrow Seven on race days from the owner’s enclosure or visit him at his training yard. All prizemoney from Burrow Seven’s race wins will go to the charity.

Upon joining members will receive a welcome pack which includes a letter of thanks from Rob Burrow, a certificate of membership, a photo of Burrow Seven, a lapel badge and information from the MND Association about the research they are funding to help find a cure for motor neurone disease.

Throughout the year members will receive regular updates about the horse’s performance and upcoming fixtures, including videos of him in training on the gallops so they can observe his form. They will also receive updates about progress being made in the field of motor neurone disease research.

Jenn Dodd, Regional Fundraiser for MND Association in Yorkshire, Humberside and the North East said: “We have been overwhelmed by the support we have received inspired by Rob Burrow and to see initiatives like this now kicking off to continue that support is just incredible. The funds raised will make a real difference to the MND Association and to the 5000 people across the country who, like Rob, are living with MND today. We’re so grateful and wish everyone well as they embark on this exciting venture.”